Michelle confides in Liz and Tony that she loves Steve to bits but she’s at the end of her tether. Desperate to save their relationship, she books a weekend in the Lakes, telling Steve they’ll go in his new car and he needs to be ready for 3pm. Liz warns Steve that if he doesn’t buck his ideas up he’s going to lose Michelle and he’s only himself to blame. But when Michelle finds him sitting in his car, showing no interest in going to the Lakes, she finally snaps and begs him to tell her what’s wrong. Will Steve be able to explain his emptiness?

In the Bistro Gavin approaches Michael & Gail and introduces himself.

Mary drags Dev into her camper van, explaining she’s suffered an allergic reaction to her false eyelash glue and will have to pull out of the party. Encouraged by Steph, Julie agrees to accompany Dev to the party and hurries home to get changed.

Owen, Anna, Gary, Katy and Faye move into the bookies flat, determined to make the best of it. Pretending she’s got a nail appointment, Kylie leaves David at the salon and heads off to meet Callum. He gives her some speed but refuses payment, claiming he’s the father of her child and he’s here to help.

Michelle gives Steve an ultimatum, either he tells her what’s wrong or she’s leaving. Steve remains tongue-tied. Utterly devastated, Michelle gets out of the car and returning to the pub she announces that she and Steve are finished. Lloyd and Andrea find Steve sitting in his car listening to music. They beg him to apologise to Michelle and save his relationship, but Steve’s unresponsive, unable to deal with his emotions. As Michelle packs her bags, will Lloyd be able to get through to Steve?

Michael apologises to Gavin for being an absent father and hopes they can get to know each other. Telling Michael he needs time to think things over, Gavin leaves. Gail does her best to comfort a deflated Michael as he waits to hear from Gavin.

Dev escorts Julie to the party at a posh hotel. He introduces Julie to his golfing friend Dominic and they hit it off immediately. Dev’s quietly jealous, especially when Dominic and Julie exchange phone numbers.

When Kylie receives a text from Callum she quickly deletes it without reading it. 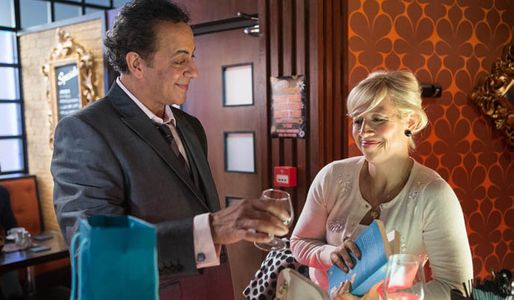