Tracy enters Barlow’s Buys to find a visiting order from Rob on the mat. As she announces to Todd that she’s turning Barlow’s Buys into a florists, Robert meanwhile asks Ken for Tracy’s hand in marriage. But as Ken, Emily, Nessa and Robert prepare to leave for Amy’s violin concert, there’s no sign of Tracy. Amy becomes increasingly nervous. In the prison visiting room, Tracy reels as Rob lies to her, claiming there’s a strong chance he might be released and he hopes they can start again.

Rob phones Johnny from prison and puts pressure on him to come up with the money. When Aidan enters the office, Johnny kills the call. Johnny arrives home to find Carla and Kate trying on wedding dresses. When Michelle muses that they could be sisters, Johnny’s rattled.

When David complains to Nick how uncomfortable the spare bed is at Audrey’s, Nick urges him to return to his family and make up with Kylie. Will David go home?

Kevin and Anna discuss their respective dates that evening and realise they’ll be in the bistro at the same time. They wish each other luck. Tyrone takes delivery of two dozen Christmas trees. As Kevin and Luke help him stash them at the garage, Tyrone gets a call from Fiz to say Hope has another infection and is being transferred to the General. After a phone call from Steve, Michelle’s furious.

As Rob puts pressure on Tracy, telling her he needs to know that she still loves him, Tracy suddenly remembers Amy’s concert and flees from the visiting room leaving Rob frustrated. Tracy lets herself into No.1 to find Amy deeply upset. Ken explains how Amy lost her nerve and refused to play without Tracy there. When Robert demands to know where she’s been, Tracy feeds him a pack of lies and Robert’s suspicious. Tracy secretly phones Rob and assures him she still loves him and will be waiting for him when he gets out. Rob’s pleased his plan is coming together and phones Robert, telling him he’s sending him a visiting order as he’s got some information about Tracy.

Aidan and Kate erect a table-tennis table in the factory and explain how they’ve agreed that Underworld will take part in a ping-pong tournament with O’Driscolls.

In the hospital, Fiz explains to Tyrone how they’ve put Hope on a drip but she might not be home for Christmas. David drops the kids back at No.8. The atmosphere is frosty and when David asks Eva if she’d like to meet up for a drink as he’s now single, Eva’s embarrassed. Michelle breaks the news to Amy that Steve won’t be home for Christmas as he’s staying in Spain to look after Andy who’s broken his leg. Zeedan starts work at the bistro. 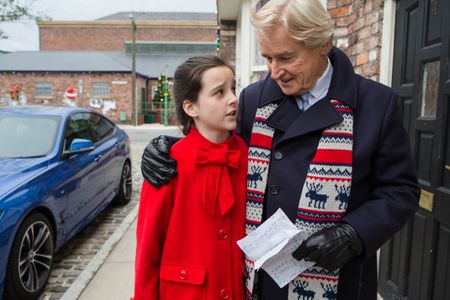