Coronation Street 21/7 - Leanne has something to tell Simon

While David wants justice Gail’s more worried about Max who’s clearly upset. In the hospital, Sarah picks up a newspaper and is shocked to read the details of Kylie’s death. Bethany arrives at the hospital to find Sarah packing her bag. Sarah explains that she’s read the awful news about Kylie and David needs her. Bethany begs Sarah to unpack her bag and stay in hospital until she’s better for her and Harry’s sake. Sarah reluctantly agrees.

As Leanne does her best to disguise her morning sickness,Simon secretly panics, suspecting her to be terminally ill. As Leanne waits nervously with Steph for her doctor’s appointment, they’re interrupted by the arrival of Simon who tearfully demands to know what’s wrong with her. Leanne assures him it’s nothing life-threatening. Having been assured by the doctor that all is fine with her pregnancy, Leanne’s relieved but worried how Simon will take the news. Leanne plucks up the courage and breaks the news to Simon that she’s pregnant. Simon’s stunned.

Yasmeen, Sharif and Alya attend Sally and Tim’s soiree. Although initially frosty, Yasmeen and Sally soon find a common interest in environmental issues and get on like a house on fire. Tim and Sharif are amazed. Having spotted her throw onSally’s sofa, Yasmeen calls Sally a thief and grabbing the throw, flounces out followed by an embarrassed Sharif and Alya. Sally’s incensed.

Steve’s horrified to realise he’s missing his wedding ring and wonders where it is. Although initially awkward, Johnny and Jenny admit how much they enjoyed their tryst yesterday and kiss tenderly. As Steve searches frantically for his wedding ring, Michelle reveals that she took it away and had it engraved. As Michelle hugs him, Steve looks guiltily over her shoulder.​​​ 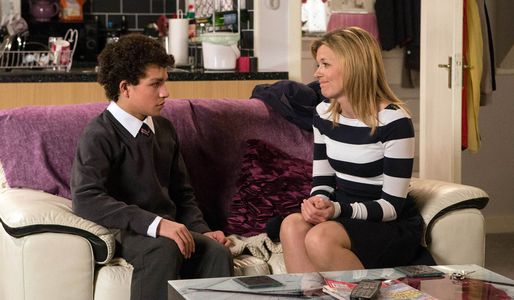