Whilst Anna, Tim and Gary prepare for the christening, Faye is dreading the prospect of the day ahead. When Tim witnesses Faye snapping at baby Miley he’s left feeling concerned by her behaviour. During the service it’s obvious that Faye has no interest whatsoever as she plays on her phone, while an awkward Jackson sits with her parents. Tim is overcome with emotion as he gives a reading. The pressure becoming unbearable for Faye she runs out, is motherhood all too much for Faye?

David, Gail, Audrey and Nick all attend Kylie’s first drug counselling session in support. When Michael turns up how will Kylie react?

Dev makes an attempt to impress Talisa with his weight-lifting skills in the gym, but as Mary witnesses his flirting she worries for Julie. Unaware of Dev’s changing feelings, Julie is giving Brian marching orders to leave her alone, certain her future is with Dev.

Tracy is unimpressed to be greeted by Brian at the breakfast table, wearing Ken’s kimono. Fiz and Tyrone sense Cathy might be starting to see Roy as more than a friend, as she pretends her fridge is broken so she can dine at the cafe. Their suspicions are confirmed when they later discover her food shopping, insinuating that she’s told a white lie to see Roy.

Tim calls off the christening, for the sake of Faye and Miley’s well being. Whilst he’s breaking the news to the congregation, Josie and Grieg approach Tim, suggesting it may be better if Miley were to live with him. Tim meets with the couple to discuss the possibility and agrees to talk to Anna and Faye about the suggestion. But how will Anna take to the idea?

Kylie is left mortified when David begins to air the family’s dirty laundry. The counsellor insists that it must be positive vibes all round, but will David be able to hold his tongue and support Kylie? Tensions rise even further when Sarah calls at No.8 with Callum.

As Brian cooks dinner for The Barlows, Tracy is sick of the sight of him and urges him to be more proactive in his bid to win back Julie. Meanwhile Julie tells Dev about her encounter with Brian, but assures him there’s nothing to worry about. Dev squirms as Mary has her beady eye on him.

Roy invites Cathy to join him for dinner at Ken’s, but Tyrone becomes suspicious as she comes up with excuses. Cathy later joins Tyrone and Fiz for a drink in the pub and discusses her and her late husband's passion for quiz shows. Fiz suggests a Rovers pub quiz but Cathy seems reluctant. 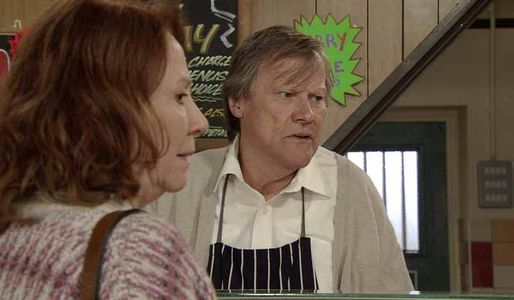 Coronation Street 22/11 – Simon is bullied by Faye and Grace