Phelan drops his van into the garage and Kevin offers to fix it for free by way of an apology for Anna’s behaviour. Finding Anna alone in the café, Phelan parks himself at a table and stares at her making Anna feel uneasy. Turning the café sign to closed, Phelan threatens Anna, demanding she make a public apology to restore his good name. Pinning Anna against a wall, Phelan tells her he can have her any time he wants. Anna’s scared witless when suddenly they’re interrupted by the arrival of Kevin, what has he heard?

Michelle and Johnny are upset to hear Carla and Nick’s plans to move away. Gail’s hurt to find out from Michelle. Nick breaks the news to Robert, Steph and Andy that he plans to sell the bistro. Tracy feigns surprise. With Tracy egging him on, Robert tells Nick he’d like first refusal to buy the bistro. Will Nick agree?

Tim starts at Street Cars but it’s soon clear he knows nothing about the business and his only interest lies in the biscuit tin. Eileen and Michael are unimpressed.

Cathy’s furious with herself to realise she switched off the fridge and freezer in the café and all the food is wasted. Steph’s unimpressed to discover she has to work on her 21st birthday because Andy forgot to book the evening off, she’s also underwhelmed by his choice of gift. Having thrown a sickie from work, Rana calls in the bistro and flirts with Zeedan.

Kevin demands to know what’s going on. Phelan paints on a smile and makes out he called in the café with the intention of burying the hatchet with Anna. Anna’s appalled at his barefaced lies whilst Kevin finally sees Phelan for the bully that he is. Kevin apologises to Anna for disbelieving her and suggests they try again, will Anna agree? Kevin confronts Phelan and accuses him of threatening Anna. As the two men square up to each other, Tim steps in to prevent a fight. Eileen and Jason take Phelan’s side whilst Michael isn’t sure what to think. Kevin vows to get to the truth about Phelan and Anna’s past. With an evil smile, Phelan wishes him luck.

Nick tells Leanne that he’s selling his share of the bistro and looking for a buyer. Robert and Tracy are disappointed to discover they can only get a loan for £90k, leaving them £10k short of Nick’s asking price. Robert makes Nick an offer of £90k for the bistro. Giving Carla a threatening look, Tracy tells her to make sure Nick accepts the offer.

When Norris and Sally score political points off each other across the pub, Liz threatens to bar the pair of them.

Leanne calls on Ken and Simon, keen to hear about their trip to Portsmouth. Will Simon thaw towards Leanne? Steph’s unimpressed when Andy suggests they could get fish and chips after work to celebrate her birthday. How will she react when he reveals it’s all been a wind up? Alya and Rana enjoy a girly night in. Zeedan’s pleased to hear Rana’s applied for a job at the medical centre. 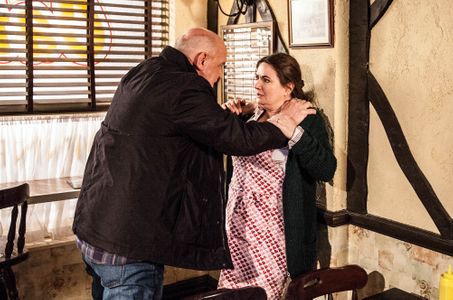