Steve stares into space, clearly troubled. Michelle tells Liz she’ll be there for him but will she take him back as a partner? Aware she needs to make a decision Michelle meets with Hamish. Will she end the fledgling relationship and focus her attentions on caring for Steve? Gossip is rife as the factory girls discuss the crash and how Steve
walked away and abandoned them to their fate.

In the hospital, the doctor tells Sinead that she has a bone pressing on her spine and needs an urgent operation. Sinead’s fearful she’ll never walk again. Chesney, Beth, Kirk and Craig watch anxiously as Sinead is wheeled away for her operation.

Meanwhile news of Tracy and Carla’s fate spreads through the street. Eileen phones Billy to make him
aware of Sean’s accident. Gary arrives at the hospital, desperate for news about Alya.

Yasmeen puts Roy to good use at the community centre letting him devise some cookery classes. Roy embraces the challenge.

As David peruses his bank account, his spirits are lifted to see that Kylie’s been shopping in Freshco. He sets off to look for her. Will David be able to trace Kylie? Gavin and Steph break the news to Michael that Steph isn’t actually pregnant and it was a false alarm.

Chesney, Beth and Kirk wait nervously for news of Sinead’s operation, terrified she may never walk again. Chesney confesses to Beth he’s never loved anyone as much as he does Sinead. Will Sinead come through the operation? Meanwhile in the hospital Gary apologises to Alya for not being there for her. But is it too little too late? Billy admits to Sean that when he heard he’d been involved in a crash, it made him realise how much he means to him and hopes they can be more than just friends. Will Sean be able to grab his chance of happiness?

As gossip about the crash continues, Michelle is quick to leap to Steve’s defence. Steve confides in Michelle that Sinead might end up in a wheelchair and everyone blames him for the crash. Michelle holds him and with some encouragement, Steve takes his first anti-depressant pill.

In an attempt to make amends, Roy offers Gary a job in the café. How will Gary respond? Roy tells Mary that he’s trying to put things right and hopes that they can still be friends. Will Mary thaw towards him?

David, Eva and Max all leaves messages on Kylie’s phone telling her how much they miss her and begging her to come home. 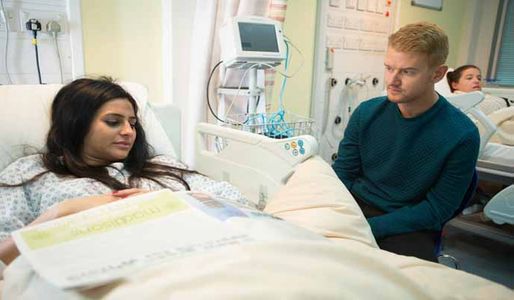