Dressed in black for Gavin’s funeral, Gail promises to meet David at the mediation. At the funeral Gail and Andy pretend not to know each other. Gail hurries from the graveside hoping to make a quick exit but Barbara intercepts, insisting she attends the wake to speak to Gavin’s mother, Michael’s ex-wife. Gail’s horrified as Susan expresses a heartfelt wish to meet Michael and bury the hatchet, and tell him all about the years of Gavin’s life that he missed. Meanwhile David’s on edge when Gail fails to show at the mediation. With his mum in tow Callum relishes David’s anxiety. The session underway David’s temper gets the better of him as Callum paints a grim picture of Max’s life with the Platts, labelling Kylie a junkie. As incredulous David hurls insults at him in front of the mediator, will he play right into a smug Callum’s hands?

While having a clear-out at the pub, Michelle finds some unopened letters. Steve is riding high after completing his first airport run in ages but Michelle looks on troubled, revealing to Liz that Steve owes £10,700 in unpaid tax after ignoring months’ worth of letters. Worried about setting back his recovery, will Michelle broach it with Steve?

Kevin meets Jenny for lunch in the café and is stunned when she finishes with him. Jenny tells Kevin their relationship is doomed as Rita, Sally et al will never accept them. But will Kevin take no for an answer?

Craig tries to get Faye to reconsider giving birth in secret without professionals on hand, will she have a change of heart? Explaining how unhappy she is with Sarah in Milan, can Bethany convince Gail to let her stay in Weatherfield?

Flustered Gail tells Susan that the stress of meeting her would be too much for Michael’s heart. Susan’s disappointed and Gail feels awful for lying. David confronts Gail when she returns home and furiously accuses her of letting him down. Gail’s lost for words as he demands a reason for her absence, so Andy lies that he had a suspected heart scare and Gail took him to hospital. David’s mollified and agrees not to tell Michael so as not to worry him. But when Michael arrives back will he sense the tension after Gail’s day from hell?

Liz checks with the tax office and confirms that the bill is correct. Michelle breaks the news to Steve. Mortified, he admits he hid them away at the height of his problems and forgot about them. Michelle’s worried when guilt-ridden Steve promises to fix things.

Kevin implores Rita to give him and Jenny her blessing, or he risks losing her. Not wanting to ruin his chance of happiness, Rita magnanimously wishes him well. As Jenny plays with Jack at No.13, Kevin begs her not to give up on them. Jenny’s gaze drawn to Jack, will she back down?

Craig presents Faye with a pregnancy book and orders her to make some firm decisions about the birth. When Anna tackles her about her low mood, will Faye open up to her mum? Bethany tries to butter up Gail into letting her stay. 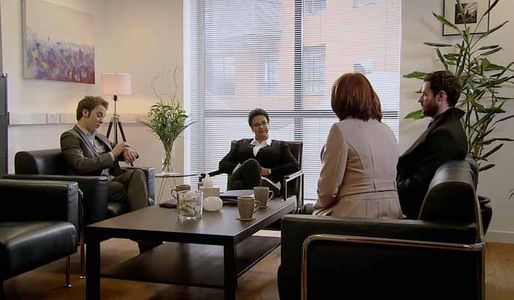 Coronation Street 03/07 - Chesney Gets Caught In The Crossfire