When Eva wakes up at Jason's, she feels sheepish and although she doesn't regret it says it shouldn't happen again because of his history with her mum. Jason's disappointed and later tries to convince Eva he won't hurt her and that they can take things slowly.

Elsewhere, as Roy is having his driving lesson Hayley spends time at the park with Fiz, Hope and Ruby. Back at the cafe, Hayley's upbeat mood is affected when she gets a call from Christian.

Also, as David makes plans to christen Lily and adopt Max, Kylie admits to Gail that there's a shadow over everything because Lily might not be David's. Though Gail tells her to keep calm, both she and David secretly fear things could soon come to a head as they receive a call that Nick's woken up.

Eva and Jason apologise profusely to Stella, who tries to remain upbeat. But Gloria can see through Stella's act and presumes it's to do with Eva and Jason. But she insists it's not them - it's being in the pub after all that's happened. She wants to move on - so she makes a shock announcement.

Elsewhere, Hayley's relieved but terrified when Christian tells her he wants to meet her on Wednesday. Roy and Fiz urge her to be cautious, and Hayley admits she could've made a mistake - but she needs to see Christian before she dies.

Also, Tina urges David to tell Kylie the truth as Nick is taken for tests in hospital. 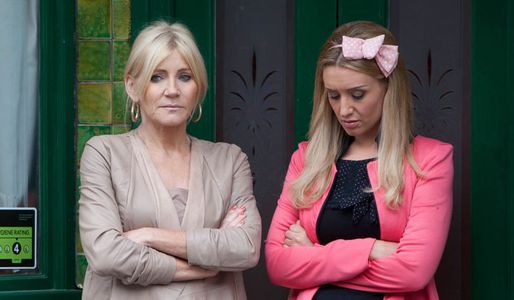