As they work side by side in the café, Cathy’s snappy with Alex, dwelling on her suspicions about his paternity. When Nigel ignores her messages, furious Cathy leaves Alex in charge of the café and storms out. Roy finds the café in chaos with Alex yelping in agony, having scalded his arm, and takes him to A&E. At Nigel’s house, Cathy bangs on the window,demanding the truth about Alex. As Cathy sits outside his house refusing to budge, Nigel caves and invites her inside. Cathy asks Nigel outright if Alex is his son. Will she get the answer she fears?

Alya tells Sonia she’s outstayed her welcome at No.6. Sonia’s shocked by her bluntness. When Sonia reveals Alya seems to be onto them, Sharif decides it’s time she moved out. Sensing his panic, devious Sonia suggests he buys one of Phelan’s flats for her. Sharif confronts Alya about her outburst. Alya’s unrepentant, telling her granddad that Sonia clearly fancies him. Sharif’s unnerved by how near she is to the truth and agrees to convince Yasmeen that buying a flat is a sound investment for them and Sonia can rent somewhere else while it’s being built.

Alya and Sinead excitedly outline their bespoke design ideas.Aidan’s impressed but sceptical Johnny demands facts and figures before the venture can proceed.

Due to Mary’s new job at the florist’s, Erica takes charge of Aadi and Asha for the day.They’re quick to realise she’s no pushover and the twins vow to get Mary back. Freddie’s disappointed when Audrey turns down his invitation to lunch. Maria advises him not to give up.​​​

With the truth about Alex’s paternity now out in the open Cathy’s in shock as Nigel explains how he found out he isn’t Alex’s father. He apologises to Cathy for keeping her in the dark. Back at the cafe Roy returns with Alex, and baffled by Cathy’s foul mood, demands to know why she walked out. As Cathy explains all to Roy his calm approach doesn’t help and she blasts Roy for his lack of understanding. As she storms upstairs, Roy feels like a stranger in his own home and glances sadly at a photo of Hayley.

Yasmeen and Sharif inform Alya of their plan to invest in a flat and rent it to Sonia. Alya sneers at Sonia’s manipulation and Yasmeen’s confused by her rudeness. When Alya refuses to drop her suspicions, Sharif lies and claims he slept with Sonia once,years ago. A stunned Alya works out that Sharif’s buying Sonia’s silence by setting her up in a flat.Sharif admits it but insists he loves Yasmeen and begs Alya not to betray his secret. Will she agree to keep quiet?

Johnny thinks there’s no market for Alya’s vintage designs. Aidan disagrees and goes to a meet a client to drum up interest. Johnny heads off on holiday with Jenny. Revealing their designs impressed the client, Aidan offers Alya and Sinead a £60bonus each. Sinead’s pleased but Alya furiously accuses Aidan of ripping her off.

Maria conspires with Tyrone to persuade Freddie to have one last try at changingAudrey’s mind. At their suggestion, Freddie calls at the salon on his motorbike. Declaring he’s made a mistake, Freddie asks Audrey to join him for a romantic country pub lunch. As Erica’s patience with Aadi and Asha wears thin, Dev confronts Mary with a copy of her contract, pointing out she’s breaking its terms by leaving Erica to cover her duties.​​​ 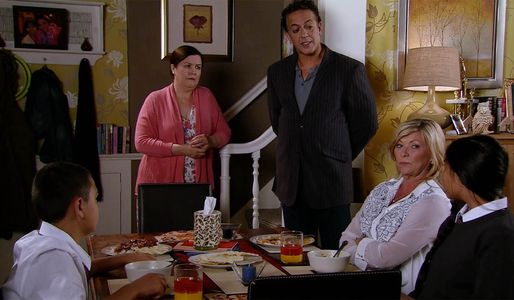