Faye gives Gary the money she’s received from an Aunt and tells him to buy a present for Jake. Gary’s gutted to discover he’s got the same gift as Anna. Izzy’s annoyed, pointing out that Gary knew what Anna had bought and Katy’s quick to put the knife in, suggesting Gary’s preoccupied with Alya. Humiliated, Gary sets off back to the toy shop. But having returned Jake’s present he blows the money on beer instead. Anna, Owen and Faye are furious with him. Gary heads out telling them he’ll spend Christmas elsewhere.

Callum pulls out a big wad of cash as he pays Kevin for his MOT. Kylie watches, wishing Callum would just disappear and leave her alone. When Callum then tries to tempt her into his car by showing her a bag of cocaine, will Kylie give in to her demons?

When Lloyd gets a call from the British Embassy to tell him Jenna’s been arrested in Spain, he’s worried sick and tells Andrea he’ll have to fly out to Madrid immediately. As Andrea sees Lloyd off, Steve’s nonplussed and Lloyd leaves, hurt.

Roy suggests to Yasmeen they organise the soup kitchen at Roy’s Rolls rather than the
Community Centre as he has all the equipment. Sally offers up Sophie and Maddie’s services. 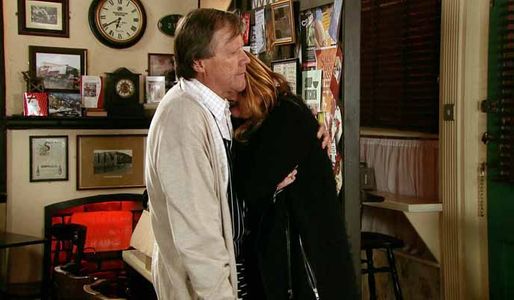