Tony sets off with Tracy to buy a job lot of stolen electrical goods. He promises Liz he’ll be home in time to take her out. Tony and Tracy meet up with an old mate of Tony’s. Tracy plays hard ball but they eventually strike a deal. However as Tony and Tracy prepare to leave with their van load of knock off goods, a police car pulls up beside them.

After a chat with Sally, Sophie gives Kevin her blessing, telling him he can go out with Jenny if he likes, she just doesn’t want to see him get hurt. Kevin’s pleased at her change of heart. Having ascertained that Rita is away, Jenny agrees to accompany Kevin to the Rovers. But Rita returns home early and insists Norris, Emily and Mary join her for a birthday drink. As Rita approaches the bar, how will she react as Jenny wishes her a happy birthday?

Still clearly awkward with each other, Lloyd tells Steve he doesn’t want any bad blood between them.

Jason mopes in front of the telly whilst Eileen fusses round him. Todd’s quietly jealous, his hatred of Eileen growing. Liz worries that they’re short-staffed at the Rovers. When Eileen offers her services, admitting she could do with some extra cash, Liz takes her on. Will Eileen prove to be a hit behind the bar? Handing Luke the key to her flat, Maria leaves him to crack on with the tiling. 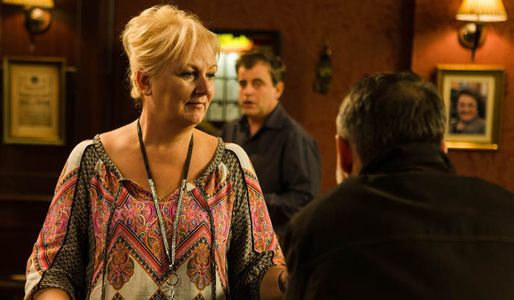