Jason and Phelan head to the community centre to put right the damage but Tod remains convinced that Phelan was behind the break-in. Todd, Jason and Yasmeen head to the builder’s yard hoping that the CCTV camera there might have picked up the intruder who broke into the community centre. Phelan arrives and points out they’re wasting their time as the camera is unplugged. Yasmeen thanks them for all their hard work and hands them a generous cheque. An uneasy Todd looks on.

Michelle’s grumpy after a restless night. Steve reckons it’s because she’s got used to having the bed to herself but Liz has her own suspicions. As Steve goes to hug Michelle, she pulls away suggesting they talk later. Steve’s left disappointed and confused. Liz confronts Michelle demanding to know if she spent the evening with Will. Michelle admits she did but assures her nothing happened. Will calls in the Rovers and drops the bombshell that he’s split up with Saskia. Michelle’s stunned.

As Eileen settles down for an evening in front of the telly,she’s interrupted by a visit from the police. They explain they’re looking for Jason as they need to talk to him about his father.

When Alex turns up with another hangover and tries to blag a tenner out of Cathy, shetells him he can earn the money by cleaning out the freezer. Chris calls in the Rovers looking for Amy’s mum. As Steve explains that Tracy works in the flower shop, Liz quickly intervenes and drags Chris into the back. Both equally embarrassed, Liz and Chris confess that Amy and Sam are their grandchildren and they lied about their own ages. Is this the end? A distracted Billy snaps at Sean.

Eileen breaks the news to Jason that Tony was found dead in his flat with a suspected heart attack. Jason’s shocked to the core. When Jason discovers that Tony may have lain dead for three days, he blames himself. Phelan calls at No.11 and when he hears the news, he gives Eileen a comforting hug. Todd watches him skeptically. Clearly angry, Jason tells Eileen that he blames Liz for Tony’s death because if it weren’t for her, he’d still be living near his family and they could have saved him.

​​Michelle explains to Will that their kiss was a mistake and she lovesSteve. Will is dejected. Tim assures Steve that Michelle missed him terribly whilst he was away and Steve resolves to make it up to her. Weighed down with guilt, Michelle steels herself to tell Steve about her dalliance with Will but she’s thwarted when Steve presents her with flowers telling her how much he loves her.

Billy apologises to Sean for snapping at him and blames it on the stress of his job. As Sean and Billy discuss the shocking news about Tony, Billy’s phone rings. It’s from Lee and Billy quickly kills the call. Sean’s none the wiser.

​​Alex asks Cathy for his money. Cathy reluctantly hands him a tenner and warns him not to waste it on booze. Liz reveals to Erica how she and Chris were playing the same game and both lying about their age. With the first aid course over, Rana playfully suggests they nip back to No.6, but Zeedan refuses, telling her he respects her too much. Rana’s put out. 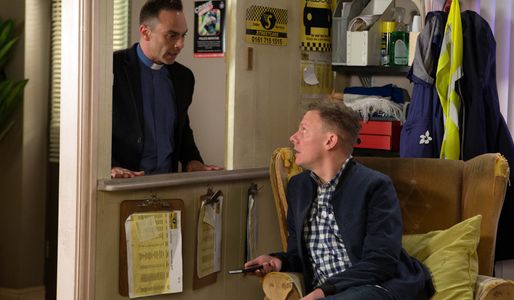 Coronation Street 05/04 - Daniel's Ghosts Come Back To Haunt Him