As Bethany does Mary’s makeup, Mary admits she’s not proud of lying to Jude about her sham wedding. Jude, Angie, George, Sean, Tracy and Dev gather for the wedding. As Jude walks Mary down the aisle, he tells her how he’s thinking of tracing his father’s family. Mary does her best to cover her shock. All at sea will Mary go ahead with a marriage of convenience?

Having found out Shona’s plans from Todd, Sarah breaks the news to David that she intends to fund an appeal for Clayton. David’s incredulous. Fired up, David marches into the café and confronts Shona. Locking the café door, Shona turns on David telling him it’s time they cleared the air.

With still no news of Chesney, Sinead and Fiz are beside themselves with worry. When Tyrone hears that Roy’s allotment shed has been broken, he finds Chesney there cowering alone.

Maria and Will welcome Robert and Michelle back from Brighton. Giving Michelle a loving kiss, Robert heads off to work. Will masks his irritation. As Rita prepares for Norris and Mary’s wedding, she’s perplexed when she can’t remember where she’s going.

As Mary explains to Angie how she was raped as a teenager by Jude’s father who was a family friend, neither of them notices Jude who overhears every word. As Norris assures Jude that Mary was only trying to protect him from the awful truth, Mary explains to Jude how he was taken from her as a baby but she’s never stopped loving him. How will Jude react Mary’s revelation? Jude reveals that they’re thinking of relocating to Manchester anyway. Mary’s thrilled whilst Angie looks askance at Jude.

Playing the concerned friend, Will persuades Michelle to let him take her into town and take her mind off recent events. But when he starts quizzing her about Robert’s relationship with Rich, Michelle becomes defensive. Has Will overstepped the mark and exposed himself? A jubilant Eileen announces she’s passed her driving test. David and Shona admit how much they like each other but recognise how difficult their relationship is going to be. 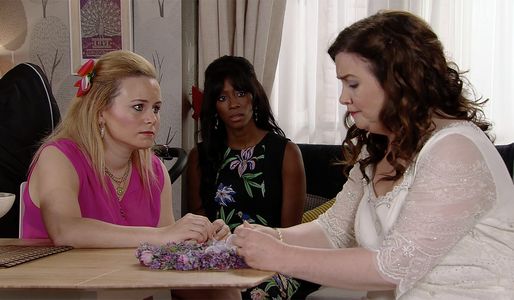