Whilst Gail, Michael and David call in the bistro to see Nick, Kylie stays at home to prepare Christmas dinner. She’s horrified when Callum lets himself in and presents Max with a brand new bike. Kylie orders Callum out of the house but Callum refuses to leave and pulling out a bag of speed, offers it to her. Arriving back David catches them red-handed. Callum introduces himself to David, explaining he’s Max’s Dad, Kylie’s ex and her drug dealer. David’s
horrified. Gail, Michael and Audrey return home to find David and Callum fighting. As her family life
implodes is Kylie about to lose everything?

Amy’s taken aback at the amount of presents Steve’s bought for her whilst Tony’s shocked at how much Steve has spent on food. Having promised Amy snow for Christmas, Steve drags Michelle upstairs and they drop fake snow out of the window. Misreading his signals, Michelle tries to kiss Steve. Having pulled out all the stops for Christmas, can Steve overcome his depression? Meanwhile when Tracy grabs Tony under the mistletoe, how will he respond?

At Faye’s insistence, Owen and Anna relent and invite Gary to join them for the day. But when Owen and Katy make digs at Gary for wasting Faye’s money on booze, Gary loses his temper and accidentally breaks Faye’s present. How will the family react?

Yasmeen, Alya, Kal, Sharif, Zeedan, Sally, Maddie, Sophie and Roy run the soup kitchen. Gavin’s uneasy when Michael presents him with the engraved family tankard, having added Gavin’s name to it. Jason’s gutted when he realises he’s bought Eva the wrong perfume and further annoyed when Tony gives her the right one, much to Todd’s amusement. 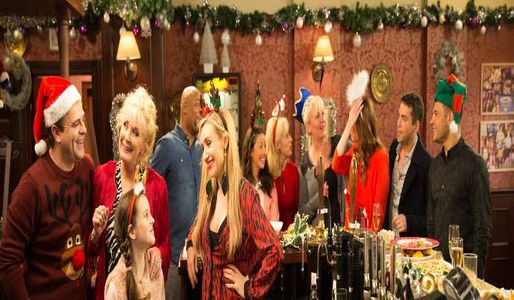