When Tracy overhears Amy telling Robert that he can be her number two Dad, Tracy realises that Robert is the one for her. In the Rovers, Tracy confides in Todd that she reckons Robert is about to propose and she’s going to accept. Robert pulls out the engagement ring from his pocket but before Tracy can take it, he demands to know why she’s told Rob she wants to spend the rest of her life with him. Can Tracy talk Robert round and get him to place the ring on her finger? Meanwhile Johnny’s phone rings and seeing the caller is Rob, Carla takes the call. Carla chats to Rob whilst Johnny goes into meltdown, will Rob spill the beans about Johnny’s past?

Tyrone produces some crackers and explains that each one is personalised. Sinead pulls the wrong cracker and is thrilled when an engagement ring lands in her lap. Tyrone quickly retrieves it, explaining it’s for Fiz. Sinead’s mortified whilst Chesney’s embarrassed. As they lead the girls out on to the street to reveal Lapland, Santa pulls up. Getting down on one knee in the snow, Tyrone produces the ring and proposes to Fiz. Will Fiz accept?

Kylie presents David with an expensive watch but he’s underwhelmed. Kylie strides into the pub, a woman on a mission and telling David she loves the bones of him, kisses him passionately. Will David reciprocate?

Sally and Tim look forward to their first Christmas alone together. But when Sophie and Kevin discover their turkey’s still frozen, Sally’s forced to invite them round. Meanwhile Izzy’s taken ill and Tim finds himself forced to invite Anna and Faye to join them too. As they play charades at No.4. Kevin goes to kiss Anna under the mistletoe, will Anna respond? Mary confides in Rita how much she’s looking forward to spending the evening with Brendan. But as Mary waits alone in a hotel lounge for Brendan to join her, will she be stood up? Caz arrives home and surprises Kate, telling her she’s booked them into a posh hotel for the night. But will Kate be as excited as Caz? 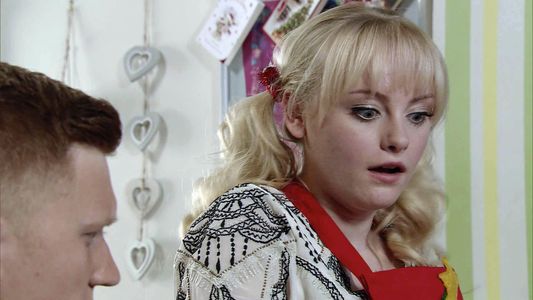