The estate agent in Devon calls Nick and Carla to say that unless they raise the money quickly, they’ll lose their dream cottage. Worried Nick asks Robert for a private word. Meanwhile Tracy tries to force Carla into speeding up the Bistro sale. Carla refuses until she and Nick are safely married and settled down south. But in the Bistro Nick reveals he’s sealed the deal on the sale - Robert is the new sole owner so they can pursue the house. Carla’s horrified as Tracy makes it clear there’s now nothing to stop her from telling Nick about her fling with Robert!

Steph tells Andy she’s fed up of Michael moping around the flat. Michael overhears and announces he’s considering becoming an ice-cream man again. Gail and Sally bump into Mary and Michael while out power walking. Gail is all over Michael, while Mary chastises her for coming on too strong, advising her to play it cool. Harbouring hopes of a reconciliation, Michael seeks out Gail in the Rovers. But with Mary in her ear will Gail give him the cold shoulder?

Kylie’s efforts to remove Lily’s graffiti prove futile and she declares the kitchen units and lino must be replaced. Meanwhile David phones Marion, reiterating that she stays away. As David and Kylie take Max to visit Sarah and meet Harry, David reassures Sarah that Marion has got the message and won’t be back.

Dev receives a wedding invite for him and a plus one. Playing cupid, Mary urges him to ask Erica and sets up Dev and Erica for a romantic evening at No.7. Sally asks Tyrone if he will become her odd job man as Tim’s too busy running two businesses nowadays. Tyrone agrees. But when Tim also offers Tyrone a driving job at Street Cars, Fiz fears he’s overstretching himself.

As Tracy lords it over the staff at the Bistro, Carla’s sick with worry that Tracy will tell all to Nick. Feigning a headache, Carla leaves. Tracy meanwhile is irritated by Nick’s happiness as he looks forward to a carefree future. As Robert berates her for throwing her weight around and bitching about Carla, Tracy storms out. Tracy proves to Carla that she now has the upper hand by ringing Nick on her mobile. Panicked, Carla smashes her phone before Tracy can say anything. Tracy grins smugly and tells a shaken Carla she owes her a phone.

Believing he’s been rejected by Gail, Michael bids an emotional farewell to Andy and Steph and sets off in his ice cream van for Brighton. When Andy tells Gail that she blew her chance to rekindle things with Michael she’s devastated, fearing she’s lost Michael for good and will never see him again. Audrey tries to comfort a forlorn Gail.

Dev plucks up the courage to ask Erica to be his plus one at the wedding. Erica tells Dev that she would love to be his plus one, and she thinks they should be more than “friends with benefits”. Will Dev agree?

Kylie and David leave a seemingly content Sarah in hospital but when they’ve gone Sarah’s anxiety is clear. Tim takes a taxi booking for the airport and gives it to Tyrone. But Eileen stops Tyrone, informing him he needs a special licence costing £300 before he can work for them. 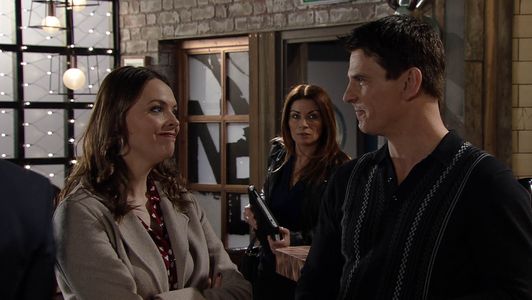