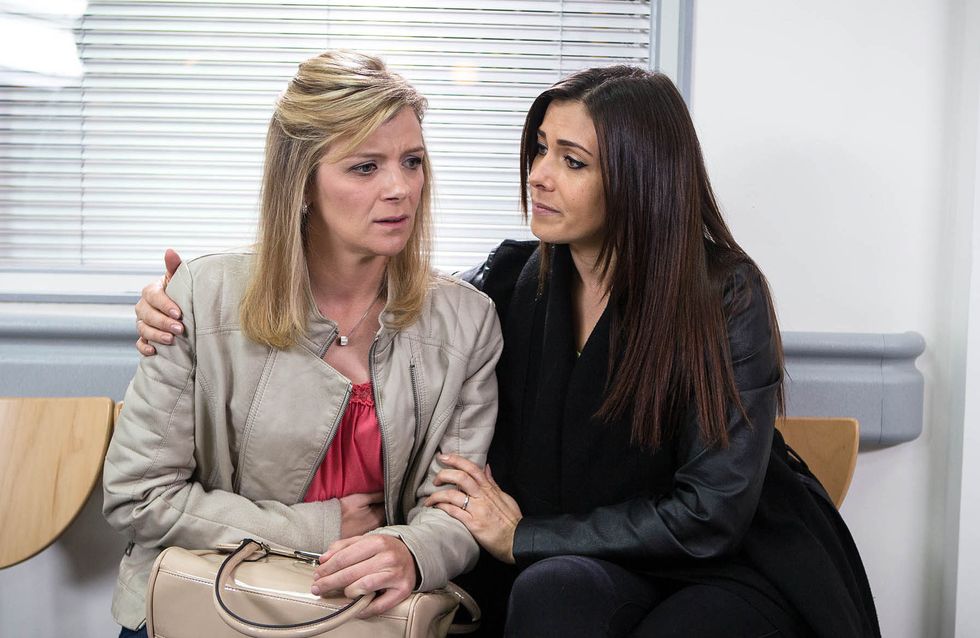 When Leanne suffers stomach pains as she chats to Michelle in the street,Simon’s concerned it’s the baby. Realising Leanne’s pregnant, Michelle gets Tim to drive them to hospital. Leanne’s anxious as she waits at the hospital with Michelle by her side.

Ignoring Rita’s words of warning, Jenny decides to giveJohnny another chance but is gutted when Johnny tells her they made the right decision by calling it a day. Johnny explains to Jenny that he needs to focus on Kate for now, rather than a relationship.Jenny bitterly accuses him of using her for sex then casting her aside.

As Caz shows no sign of moving out of the salon flat, Maria’s annoyed by Luke’s lack of compassion and refuses to turf her out. When Luke admits that Caz is secretly staying with him and Maria, shocked Sophie insists Kate must be told but Luke begs her not to betray his confidence. Kate’s stunned to see Caz at the gym, believing she was long gone. Caz is bereft when Kate harshly spells out she never wants to see her again. Caz cries on Maria’s shoulder about how she has nowhere else to go. Will Maria fall for it?

Audrey and Maria are startled when David returns to the salon and insists on taking all his scheduled appointments. David’s faux cheeriness as he works unnerves Audrey. But as he sweeps the contents of Kylie’s nail bar into a bin liner, it’s clear he’s struggling.

As Leanne waits nervously for her scan, Michelle quizzes Leanne over her pregnancy, Leanne tells her it was a one night stand. Having had her scan, a relieved Leanne tells Michelle that the baby’s fine. Michelle hugs her as Leanne thanks her for being so supportive. Michelle confides in Steve about Leanne’s pregnancy. Telling Steve how much she loves him, Michelle suggests they should have a baby of their own. How will Steve respond?

When Matthew Singh arrives in the factory for a meeting, he finds Jenny alone at her machine. Jenny explains there’s been a mix-up and Johnny and Aidan should return shortly. Matthew suggests he’ll buy her a drink in the meantime. When Johnny and Aidan findMatthew Singh enjoying a drink with Jenny in the bistro, Johnny feels a pang of jealousy. Johnny apologises to Jenny and admits he regrets the way he’s treated her. Jenny lays the law down and tells him if they’re to have any chance together, he needs to show her some respect.

Kate marches into the salon and tears a strip offMaria for allowing Caz to move in. Maria rounds on Luke for discussing Caz’s business with Sophie.Luke’s unrepentant, pointing out that Kate was bound to find out anyway. Audrey and Maria continue to fret over David, worried that he’s concealing his anger over Kylie.​​​​​ 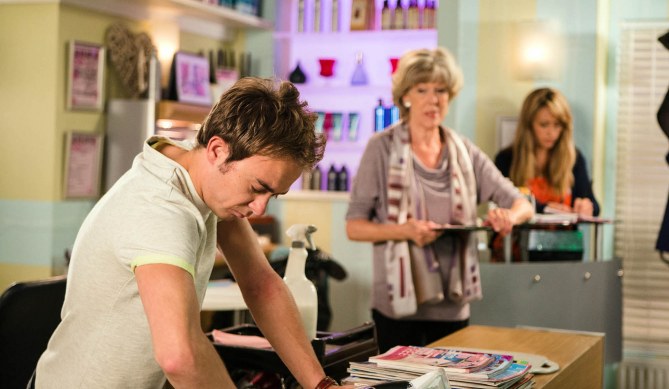