David leaves a message for Kylie telling her Gail’s dead. Gail’s horrified and when there’s no response from Kylie, David despairs. But when he then gets a call telling him Kylie’s been caught shop-lifting in Rochdale, David’s hopes soar. He and Eva set off to find her.

In the Rovers, Norris lays into Steve, blaming him for the crash and calling him a coward. Michelle leaps to Steve’s defence and announces that Steve is suffering from clinical depression. Everyone’s stunned.

When Eileen complains at the overcrowding in No.11, Eva forms a plan. Eva confides in Tony and Todd she’s going to ask Jason if he’d like to buy a place together. Tony’s delighted whilst Todd’s quietly jealous. How will Jason react to her suggestion?

Gary starts work at Roy’s Rolls. The neurosurgeon tests Sinead’s legs. Will she have any feeling or has Sinead been left paralysed by the crash? Sean prepares for his date with Billy. Leanne’s pleased when Nick announces he’s changing the name back to Nick’s Bistro.

David and Eva arrive in the supermarket only to discover the shop-lifter is Gemma, masquerading as Kylie. Furious, David spots Kylie’s bag. Gemma admits Kylie was staying with her but when she ran out of drugs she disappeared. Taking the bag, David leaves. Determined to find Kylie, David confronts Callum in the Dog & Gun. But it’s clear Callum hasn’t seen her and he threatens to reveal to Max that he’s his Dad if David doesn’t leave him alone. David goes, downbeat. But when he finds a letter in Kylie’s bag will it hold any clues as to her whereabouts?

Tony’s proud of Jason, pointing out he’s got his own business, a beautiful girlfriend and now they’re buying a place together. Todd seethes. As Jason pours over his accounts, he realises with heavy heart he can’t afford to buy a flat just yet. Todd’s secretly pleased and lets slip to Eva that Jason can’t afford it. How will Eva react?

Craig helps Tim with his window cleaning round. Chesney breaks the news to Sinead that she only imagined the feeling in her legs. Sinead’s devastated, convinced she’s paralysed for life.
Sean and Billy enjoy their date in the pub but it’s cut short when Billy is called away on a work matter. 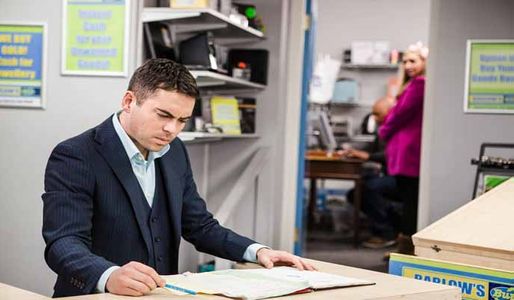