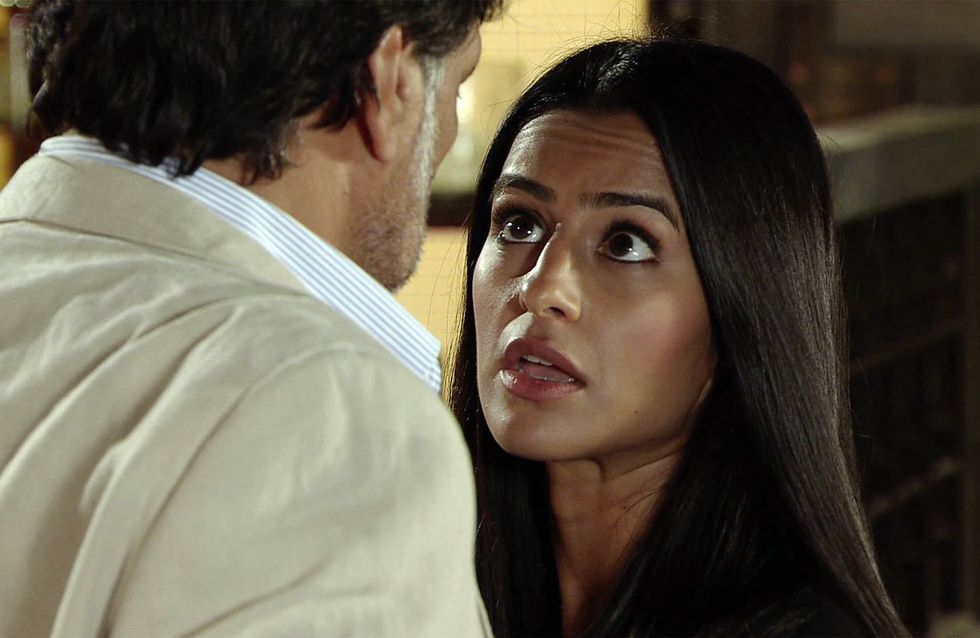 When Aidan tells Alya that the equipment they’d need in order to bulk produce her designs would cost up to £14k, Alya vows to get her hands on the money. Having already threatened to expose Sonia and Sharif to Yasmeen for their secret affair, Sharif begs Alya not to destroy Yasmeen with the truth. All respect for her grandad lost, Alya agrees to keep silent: but at what cost?

Roy warns Cathy to wait until her anger has subsided before she tells Alex the truth about his father, before whisking Alex off for a day at the allotment. Roy tries to brush off Alex’s concerns over Cathy’s bad mood but when Alex guesses that Cathy has found out that Alan was his father Roy is aghast.

On the day of Beth’s court appearance, Maria tries to talk to Kirk about Beth but Kirk diverts his attention elsewhere. Desperate for her brother to make amends with his wife, Maria tells Beth that if she’s any chance of getting Kirk back she’ll need to deliver a heartfelt apology. When Beth tries to persuade Kirk to support her in court, will he find the strength to say yes?

Dev is impressed by the twins’ business enterprise as they arrange flowers from the school garden into bouquets for him to sell, but Erica is sceptical: what are they up to? And Andy tries to tap into his creative side when he writes a short horror story but Steph is less than encouraging of his efforts.

Under pressure from Alya to cough up the money for her Underworld designs, Sharif is up against it but Sonia further adds to his worries when she makes it clear that she still expects him to get her a place to live too. Sharif is at a loss as to where he will find the funds to appease both women, until he comes up with an idea...

When Alex announces that he’s going to live in Scotland with his mum, Roy is shocked when Cathy does nothing to dissuade him. In an an attempt to get Cathy to see sense, he tells her that Alex has known all along about Alan but didn’t want to hurt Cathy’s feelings. Will this be the push that Cathy needs to see sense and encourage Alex to stay?

Beth is devastated when she heads off to court with neither Craig nor Kirk by her side. When Beth returns with a community payback sentence in tow, she begs Craig to come home claiming she misses him like mad. But can Craig find it in him to forgive and forget?

Aidan is impressed when Alya tells him she has the money to invest and they agree to be partners, but Sinead is hurt when Alya tells her that her services are no longer required. Aadi and Asha tell Tracy they’ll stop selling flowers at Dev’s if she dismisses Mary from the shop but Tracy refuses. But when Erica finds a clue which suggests where the twins have really been getting hold of the flowers, has she finally rumbled them? ​​​​​​​