Coronation Street 27/01 – Tony and Eva strike up a deal

When Eva laments to Tony how Jason reckons they can’t afford to buy a flat, Tony offers to lend them a deposit. Eva’s thrilled but when she tells Jason he’s furious, insisting they’re not a charity case. Eva’s upset as she explains to Tony how Jason refused his offer. Tony gives her a comforting hug as Todd watches on intrigued, forming a plan. Elsewhere when Tony tries throwing his weight around in the shop, Tracy realises she needs to show him who’s boss. Using her feminine wiles, she drags him into the back and seduces him. Returning from work will Todd
catch them in the act?

David worries that with Kylie gone, he has no parental rights over Max and Callum could take him away at a moment’s notice.

As it’s Tim’s birthday, Craig and Faye offer to do his window jobs for him so he can have an early dart. But as they beaver away on Sally’s windows, they spot Sally and Kevin acting strangely. Having heard this Tim heads to No.4 intent on confronting Sally and Kevin. What will he walk into? Meanwhile Tim offers Craig a window cleaning apprenticeship.

In the café, Zeedan refuses to let Gary serve him. Michael’s nervous as he reveals he’s had a call from the hospital and his heart operation is in two weeks. Steph puts pressure on Andy to track down Michael’s real son in case Michael should die during his operation. 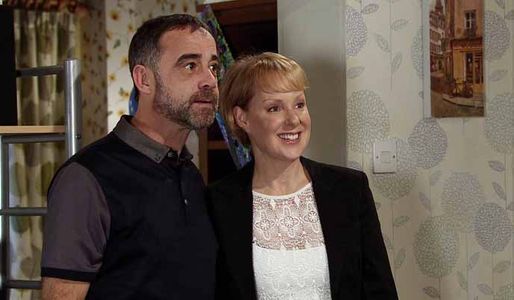