Tracy turns on the charm whilst the police officer checks Tony’s driving licence. Will he let them go or is their dodgy stock about to be discovered? Menawhile dressed up to the nines, Liz waits impatiently for Tony. Back on the street he legs it to the pub, leaving Tracy to unload the van. Will Liz realise what the pair have been up to?

Jenny explains to Rita how she found Kevin on an internet dating site. Rita tells Norris, Emily and Mary how Jenny tried to wangle £30k out of her but she sent her away with £1k and a flea in her ear and hasn’t heard from her since. Rita calls at No.13 and confronts Jenny, demanding to know why she’s returned after all these years.

Alone at No.5, Craig and Faye watch a DVD about giving birth. Faye’s terrified.

Maria heads out to meet a friend leaving Luke to re-tile the kitchen. Clearly out of his depth, Luke persuades Owen to tile Maria’s kitchen and makes him promise it’ll remain their secret. But when Maria arrives home early will Luke get caught out? Eileen struggles behind the bar.

Under Liz’s stony gaze, Tony admits that the box contains stolen goods. Angrily demanding he get shut of it, Liz reminds Tony not to bring his dodgy business into her pub. Tony carries the stock over to Barlow’s Buys and tears a strip off Tracy for dropping him in it with Liz. As Tony attempts a charm offensive on Liz, Tracy calls in the pub for a drink. Liz lays down some ground rules, telling her in future she’s not welcome in the back room and must stay on the public side of the bar. How will Tracy react to this?

Jenny promises Kevin she never ripped Rita off, she just asked her for a hand-out and Rita refused. When Jenny then makes it clear she’d like to stay the night, will Kevin be appeased?

Clearly jealous of Linda, Anna gets dressed up to the nines for a drink with Owen. When Owen demurs that Linda isn’t all bad, Anna’s left crushed.

How will Maria react when she arrives home to find Owen tiling her kitchen and Luke nowhere in sight? Will Steph be able to make her see that he was only trying to impress her? Eileen proves a lousy barmaid. 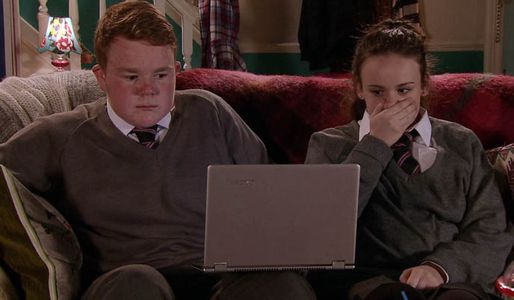 Coronation Street 27/01 – Tony and Eva strike up a deal