As Rosie and Sophie clean the kebab shop windows, the builders working nearby watch admiringly. When Norris suggests Rosie’s modelling career must have taken a nose dive if she’s reduced to cleaning windows, it touches a nerve with Sally, who calls at No.13 and tears a strip off Kevin and Anna for making the girls clean windows for a living. Anna sees red and points out that ‘Darling Rosie’ is actually a drugs mule. Sally’s stunned.

In the café, Gail discovers her purse missing from her handbag. She immediately accuses Shona of stealing it and David backs her up.

Rita’s snappy and Norris, Jenny and Mary wonder what’s up with her. Having consulted a diary, they’re mortified to discover it’s Rita’s birthday and they’d all forgotten. Aware they’re short of money, Sinead resolves to collect her soap making kit from No.5 and get her business going again.

Sally’s shocked when Rosie bursts into tears, admitting her whole career is in tatters but she’s been pretending to live the high life to avoid Sally’s judgement. Sally tells Tim what an awful mother she’s been, focusing on her own career while Rosie’s lost her job and home. With Tim’s support, Sally decides to put her family first. So when one of the builders, Zack, throws a flirty comment at Rosie, Sally threatens to report him for sexual harassment.

Roy returns to the café to find Gail and Shona in a stand-off. Shona grudgingly opens her handbag. Finding no sign of her purse but refusing to back down, Gail announces she’s boycotting the café. At No.8, David finds Gail’s purse under one of Lily’s toys. Gail reluctantly agrees to apologise to Shona but she’s unimpressed by Gail’s half-hearted apology.

Chesney’s thrilled when Sinead texts asking if she can come round tonight. Sinead calls at No.5 to find Chesney expecting a romantic reunion. ​​​​​ 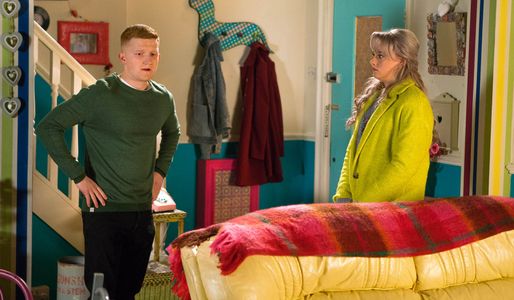