Tracy’s excited as she prepares for her wedding and at her hen do in the pub tells the girls how Rob is her soul mate. Rob meanwhile spends his stag night with Carla where she quizzes him about the night of Tina’s murder. Irritated by her obsessive questioning, Rob claims he and Tracy left their engagement party, returned home and had sex on the sofa. Nipping out, Carla corners Tracy in the Rovers and questions her also. But when Tracy tells her she and Rob went back to No.1 and headed straight upstairs, Carla realises their stories don’t match. Returning home
Carla tells a horrified Rob she now has the proof that Peter didn’t kill Tina!

Kylie secretly phones the hospital and is relieved to hear that Gemma has been discharged. As David goes to read Max a story, she flushes her last wrap of speed down the sink, determined to be a better mother and wife.

Elsewhere Michael’s worried when he receives a letter from the hospital asking him to attend an appointment with the heart consultant. When Sinead finds Cilla doubled-up with pain she begs her to tell the family about her illness, will Cilla agree?

Carla reveals to Rob that she knows he’s lying and reckons he’s covering up for Tracy, the real murderer. As Carla reaches for her phone, intent on calling the police, Rob stops her. Rob explains that Tracy was actually driving a van load of stolen gear when Tina was murdered and they lied to the police knowing they’d both be sent down if they were caught.

Rob tells Carla how much he loves Tracy and how he’s looking forward to settling down and having kids. When Carla points out that Tracy’s false alibi means he too is without an alibi, Rob loses his temper and storms out. Carla’s taken aback by the ferocity of his outburst. Rob returns to the flat blaming it on wedding nerves.

​But Carla’s not convinced and pointing out how he seemed to know from the off that she was innocent, asks him if he killed Tina. Rob tries to deny it but Carla pushes and pushes until Rob can’t take any more and finally confesses that he did murder Tina. As Rob begs a shocked Carla to keep his guilty secret and not to involve the police, at no.1 an emotional Tracy tells Ken how much Rob means to her and how she wants their wedding to be perfect! 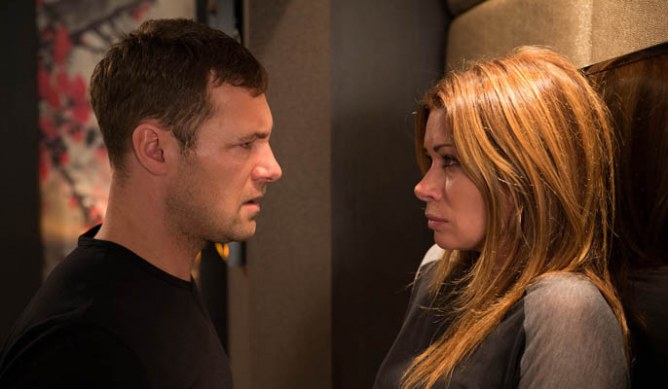