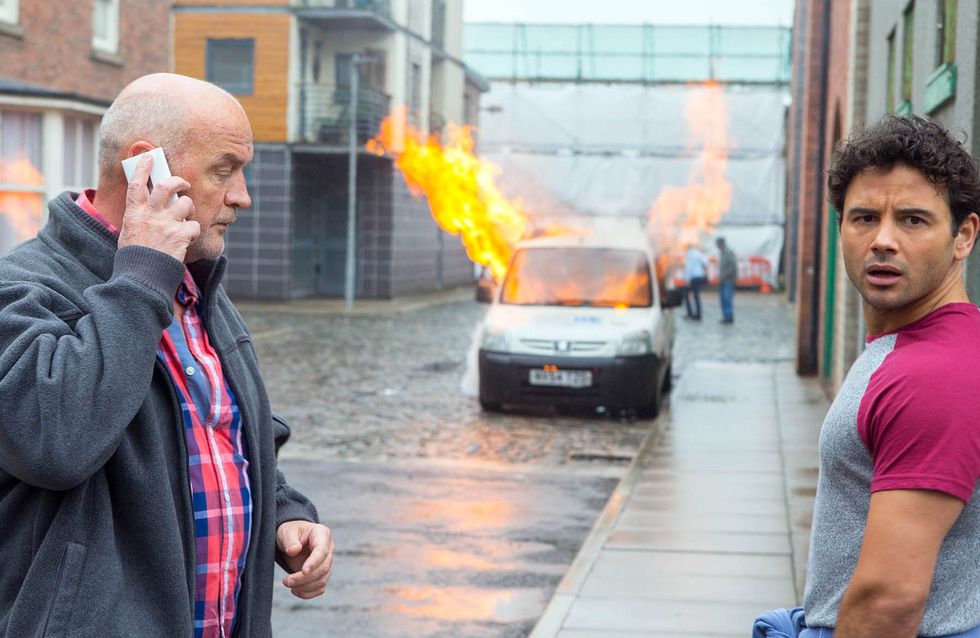 As subdued Jason opens his birthday cards, he sees a bank statement confirming that Tony’s money is now in his account. Phelan’s ears prick up and Todd clocks his interest. Jason calls at No.8 and breaks the news to David, Kylie and Gail that the police have found the murder weapon and are convinced that Tony was the murderer. Gemma warnsJason that Callum’s mates are out for revenge now that they know Tony was his killer. Phelan andEileen are horrified to find Jason writing out a cheque to David Platt with the intention of giving himTony’s money for Max and Lilly’s future. Eileen talks some sense into him while Phelan rips up the cheque. As Phelan and Jason head back to the yard, they’re shocked to find the van on fire. Has someone torched it?

Ken encourages Leanne to set up a new restaurant with Nick and offers to lend her the money. Leanne’s touched. She approaches Nick and assures him she really wants to go into business with him and was only paying lip service to Robert. But Nick remains stung and gives her short shrift.

Liz arrives back from Spain and is stunned to learn that Michelle is going away. She tells Steve to sort things out. Tim also agrees to try to talk some sense into Steve.Under pressure, Steve agrees to try to find Michelle in a last ditch attempt to save his marriage.

Over breakfast, Norris insists on a game of Othello. He’s put out when Kirk unwittingly wipes the floor with him. Determined to get his own back, Norris purchases a particularly complicated board game convinced it’ll bamboozle Kirk.​​​

As Gemma appears from the kebab shop,Jason turns on her, demanding to know which of Callum’s mates torched his van. Gemma denies all knowledge. Phelan sows the seed in Jason’s mind and suggests he should take a break until the Tony scandal has died down. As Eileen, Todd, Sean and Billy ready themselves for Jason’s birthday meal at the bistro, Jason announces he’s leaving and Phelan has kindly offered to look after the business. Phelan furtively phones his mate and thanks him for torching Jason’s van.

Robert continues to goad Zeedan, suggesting he’s got the hots for Leanne. Zeedan’s embarrassed. Tracy calls in the bistro and complains that her kidney is causing her pain. Robert’s dismissive and reckons it’s just a ruse to try to worm her way back in. Nick calls atLeanne’s flat and apologises for his earlier behaviour. He admits to Leanne that he still has feelings for her and tries to kiss her. Leanne resists and Nick heads home mortified. Leanne listens to the messages on her phone from Nick then Robert, then Zeedan. She’s interrupted by a visitor and invites them in. As Leanne’s visitor lets himself out, Leanne sits with her head in her hands, deeply regretful of what just happened.

Chesney and Sinead dupe Kirk and Beth into spending the evening together at No.5 in the hope they can sort out their differences. However, their plans are thwarted when Norris calls round and begs Kirk to return to No.3 citing a problem with his electricity. Having looked at Norris’s fuse box, Kirk realises he’s been conned. But when Norris shows Kirk the new board game he’s bought, Kirk feels sorry for him and agrees to stay for a game.​​​ 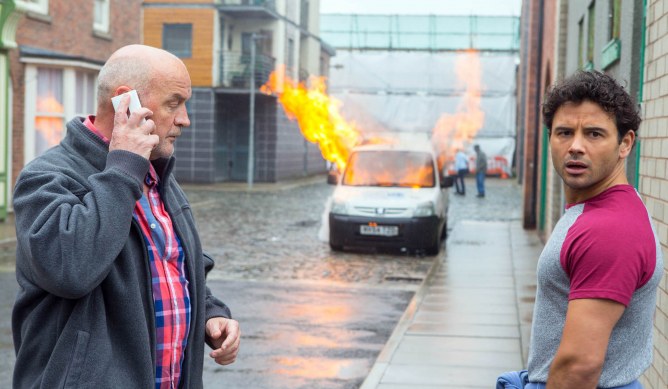