Katy takes Max to the café to give David a break. But whilst her back’s turned, Max runs out of the door. Outside Katy finds Max chatting to a stranger. The man introduces himself as Callum and assures Katy that he and Max go way back. What is Callum up to?

Eva confides in Todd that she and Tony are planning to view some flats behind Jason’s back and then when they find the right one, show it to Jason in the hope he’ll change his mind and allow Tony to give them the deposit. Todd listens, an evil plan forming in his mind. Knowing Tony and Eva are in the flat, Todd encourages Jason to pop home. As Tony and Eva pour over flat details, Jason walks in and demands to know what they’re playing at.

When Norris short changes Maddie, she’s furious but Norris refuses to hand over the money, insisting she’s lying. Discovering the till is up, Rita returns the money to Maddie. Will Norris issue an apology?

Steve tells Michelle how he can’t forgive himself for the fact Sinead might never walk again. When Michelle later asks him to run an errand for her, Steve gets in his car but suffers a panic attack, admitting to Tyrone that he’s too frightened to drive. Chesney wades in and shoving Steve, blames him for Sinead’s injuries and demands some answers. Awash with guilt and self-loathing will Steve be able to defend himself?

Sinead’s depressed, convinced she’ll never walk again and will end up being a burden to Chesney. Beth assures her she’ll never be a burden and she needs to start thinking more positively. When Chesney arrives at the hospital with Agnes in tow, Sinead’s lifted to see her great grandmother. As Chesney sits on Sinead’s bed, he lays a hand on her leg. Sinead’s convinced she can feel something. Is she on the road to recovery? Meanwhile Steve attends his first session with the therapist. Initially he’s nervous but eventually he opens up and admits how he feels he’s let everyone down and blames himself for the minibus crash.

Quickly covering the flat details, Eva makes out Tony gave her a lift back from town and she invited him in for a beer by way of thanks. Jason’s mollified. Jason confides in Todd how he found Eva in the flat with Tony and is convinced they were keeping something from him. Todd takes the opportunity to stir things and suggests it’s good
they get on so well and spend so much time together. Jason mulls over Todd’s words, his jealousy
growing.

Anna and Owen row over his constant digs at Gary. Katy drops Max back with David and tells him about Callum’s visit. David’s uneasy. 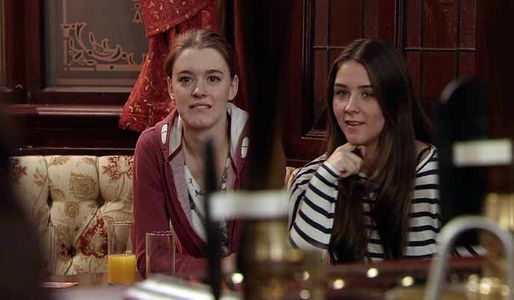