By way of thanks for all her help, Robert presents Tracy with a necklace. Tracy’s thrilled and plans to give him a special treat in return. Robert and Leanne organise a farewell drinks party for Nick and Carla. However, as they all gather, Tracy drags Robert outside to show him her special present. Robert’s horrified to find a man replacing the Nick’s Bistro sign with a new one. He orders him to stop and Tracy’s excitement quickly turns to anger. Tracy lays into Robert before turning her anger on Carla, asking Nick how he can think of marrying an alcoholic, cheating old witch. Carla slaps Tracy, as Robert drags her inside. Is Tracy about to reveal all?

Gail, David and Bethany go to collect Sarah from hospital but they’re disappointed when Sarah explains Harry has an infection and she won’t be allowed home today. When Gail tells Sarah of their plans to move her and the baby into No.8, Sarah reluctantly agrees to think about it. Meanwhile, David rows with Gemma in the kebab shop over her interfering with Marion. When David threatens violence, Gemma’s furious. She points out how she came to Bethany’s rescue and saw off the school bullies. Bethany plays down the bullying, insisting she can handle it. Will Gail and David accept this?

Masking her pain, Izzy agrees to accompany Gary and Jake on the Easter egg hunt at the community centre. With the hunt in full swing, suddenly Izzy doubles over in pain. Yasmeen and Gary rush to her aid.

Michelle arrives back from visiting Steve in Spain, Amy wants to know when her dad is coming home. Phelan ingratiates himself with Eileen, helping with the laundry and cooking.

Robert demands to know what lengths Tracy went to for him. Tracy backtracks and makes out she raised the £10k for the bistro by flogging a batch of dodgy gear. Robert’s disapproving but buys her story, suggesting that from now on they agree not to interfere in each other’s businesses and telling Tracy he’d never cheat on her. Tracy hides her disbelief at this. As they rejoin the party Carla’s relieved to realise her secret is still safe. Later, Carla lays down the law, telling Tracy she won’t be held to ransom. However, she’s shocked when Tracy reveals she never had any intention of spilling the beans. What is Tracy’s game?

In the hospital Sarah snaps at Bethany when she mentions Callum’s name. David quickly covers for Sarah, making out she’s just hormonal. Meanwhile, Sarah panics over Harry despite the midwife’s assurances that it’s only a mild infection.

When Michelle’s wedding client Saskia introduces her other fiancé, Michelle’s taken aback to realise it’s Will, her first ever boyfriend.

Phelan cooks a lovely meal for Eileen, Todd and Sean. Suspicious, Todd warns him totreat Eileen with respect. Eileen’s oblivious to their animosity. Gary takes Izzy and Jake home. Izzy breaks down and admits to Gary she’s sick of her condition and worried for Jake’s future. 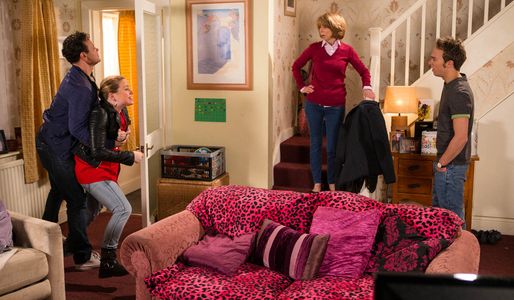