Coronation Street 28/07 – Nick has the day from hell

Nick and Leanne meet with the mediator but they’re soon trading insults and it’s clear they can’t agree on anything. Are they heading for court? Meanwhile Gail spends the day with Michael helping him clean up an old ice cream van. However Nick’s far from impressed with Gail’s hard work and as he tears a strip off his mum the two men square up to each other.

Rita agrees to give Dennis another chance but makes him promise there’ll be no more lies. But when Julie lets slip to Norris that Dennis insisted she made him homeless, in the hope Rita would take him back, are his days numbered?
Anna’s worried about a withdrawn Faye. When she then overhears her snapping at Craig, Anna wonders what’s going on.
​
Elsewhere Gary’s drawn to Alya.

Steph manages to drag Nick back to the bistro before a fight breaks out but there he turns on her when she reminds him it’s her night off, threatening to sack her if she doesn’t cancel her plans. Steph’s shocked, Nick’s a man on the edge. Meanwhile Gail and Michael share a bottle of wine in the garden at No.8, their attraction evident. When Nick arrives and spots them kissing he’s incensed and sees red.

Rita’s onto Dennis and confronting him in the Rovers she reveals she knows all about his little scam. Will Dennis be able to talk her round or has his chance of forgiveness gone?

Anna snatches Faye’s mobile and is shocked to read nasty online gossip suggesting Faye has slept with lots of boys. At first she blames Craig but it soon becomes clear he’s not the perpetrator.
​
Elsewhere, Roy’s tearful when he finds a reminder of Hayley in an old library book. 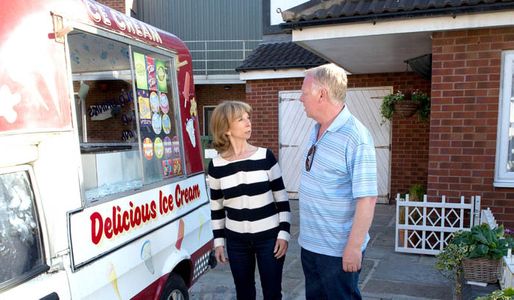