Neither having heard a word from him, Sarah and Izzy fret over Gary, praying that he’s safe and well. Sarah attends her parents’ support group. She’s taken aback when Gary arrives. At the support group, Sarah talks candidly about how she feels she let Bethany down. Gary offers some heartfelt words and promises her that from now on he’ll be there for her. Will Sarah thaw towards him? When Gary receives a call from Joe offering him another gig in the Ukraine in three days’ time, he’s clearly troubled.

In the kebab shop, Gemma moans to Cathy about her on going feud with Rita. They’re interrupted by a lad who after looking Gemma up and down, tells her she certainly doesn’t match her profile. Gemma’s upset to discover Zoe and Roxy have set up a fake account on a dating site to humiliate her. She explains to Norris how this is their revenge for her grassing them up for burgling the Kabin. Norris is given food for thought.

Sally’s furious to discover that Gina’s been storing the box of bric-a-brac which she promised she’d sold, in the store room at Dev’s shop. Sally confronts Gina, demanding to know why she lied. Gina becomes defensive, accusing Sally of embarrassing her.

Shona joins the Platts for a barbeque, only to be met by disapproving looks from Gail.When Robert reads a bistro review in which they refer to him as Nick, he realises it’s time for a revamp. Will offers to knock up some designs. Robert’s grateful, whilst Michelle’s less enthusiastic.

Gary breaks the news to Sarah that he’s accepted another job in the Ukraine. Sarah’s horrified but Gary lies to her, making out the risk is minimal and the money fantastic. When Sarah suggests an afternoon lie down, Gary makes excuses and Sarah’s disappointed. With Sarah out of the way, Gary winces with pain as he removes his t-shirt to reveal his badly bruised back and ribs. Is Gary’s work more dangerous than he’s making out?

Rita and Norris form a plan and on their instruction Rosie calls Gemma, Zoe and Roxy together for a meeting in the Rovers. Rosie masquerades as Gemma’s lawyer and putting the frighteners on Zoe and Roxy, accuses them of cyber terrorism and advises them to stay away from her client. Will the girls fall for Rosie’s act? Will Rita and Gemma be reconciled? Meanwhile when Rita goes to empty the washing machine, she’s perplexed to find there’s nothing in it. Rita tries to cover.

Gina collects her box from Dev and admits she’s in financial straits. When Dev offers her some hours in the shop, Gina’s thrilled and throws her arms round him. Sally remains cross with Gina for lying and accuses her of hiding behind her bipolar condition when it suits her. Seething, Gina borrows Sally’s laptop making out she’s going to sell her bric-a-brac online, but what is her real intent?

Will finds a silk scarf belonging to Michelle in the bistro office and stuffs it in his pocket. Robert tells Will that he needs to put his refurb ideas on hold as the date for his plea hearing has come through. 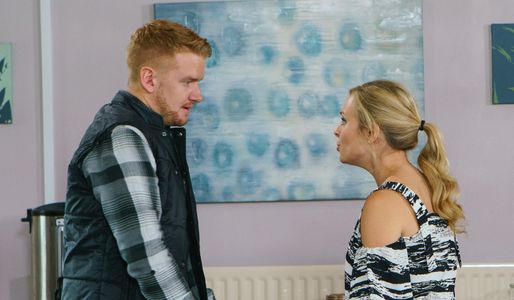