Michelle has a heart to heart with Robert and tells him her worries about the baby. Robert’s supportive and assures her she’ll be a great mum no matter what. Buoyed by Robert’s words, Michelle assures Amy that she’s going to have the baby. Nick promises Leanne he’ll stand by her whatever the outcome of Steve’s test. As the genetic counsellor breaks the news of his results to Steve and Michelle will they get the outcome they’re all so badly hoping for?

Forcing tears, Caz feeds Tyrone a sob story telling him how Maria’s gone nuts and sends her abusive texts. Tyrone’s completely taken in.​ Alya puts pressure on grumpy Sinead and insists she runs up some mock up uniforms for the kebab shop. Dev’s impressed with Alya’s uniform designs but how will Sinead react when Alya fails to give her any of the credit?

When Beth returns home to find Peanut the dog but no sign of Kirk, she’s gutted. Finding Kirk she begs him to give her another chance, will he relent? Faye confronts Seb about his intention to nick the purse. Seb makes out he was doing it for her as he wanted to buy her something nice. Faye’s appalled and when Seb reveals he’s stolen a bottle of wine from the corner shop how will she respond? With Peter present, the doctor explains to Ken how he’s suffering from aphasia. Struggling to speak, Ken orders a heartbroken Peter to leave telling him he doesn’t want any visitors from now on. 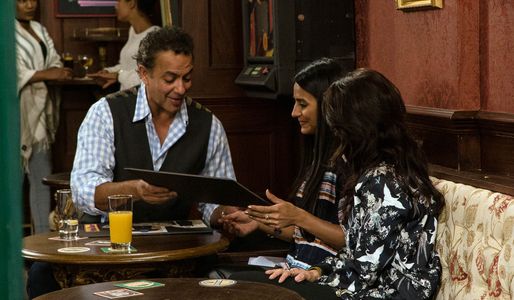