When Nick complains he’s short-staffed at the bistro, Michael offers Gavin services, explaining he’s a professional cocktail waiter. Gavin is forced to agree and although he’s clearly clueless about cocktails, there’s an instant attraction between he and Steph as she shows him the ropes. Michael calls at the bistro to lend Gavin his support but suffers a dizzy spell and collapses. Having helped Michael home, Gavin and Gail fuss round him. Under pressure from Gail, will Michael finally confess to Gavin that he has an hereditary heart condition?

Tracy’s despondent when the bank reject her loan request, worried she’ll have to fold the business. When Carla then storms into the shop and demands to buy all Rob’s possessions, appalled that Tracy could be so callous as to sell them, Tracy lets rip.

As Julie excitedly tells Sophie she’s got a date with Dominic, Dev warns her that Dominic hasn’t got over his bitter divorce. During lunch Julie and Dominic soon realise that Dev has been telling them both scurrilous stories about the other. Julie confronts Dev and demands to know why he’s been telling lies but she’s stunned by his response.

Tracy calls at No.11 and orders Todd back to work. Todd explains he’s embarrassed about his face and doesn’t want to leave the house but Tracy pulls no punches, pointing out he can’t hide away forever. Will she get through to Todd?

Michael’s worried that having given Gavin the awful news about his health, he’s scared him away. At the Rovers, Gavin confides in Steph how confused he feels about Michael. Steph assures him the Platts are a lovely family and that if he walks away now it’ll break Michael’s heart. Feeling guilty, Gavin calls at No.8 and assures Michael he just needed time to think. Thrilled to have his son back in his life, Michael urges Gavin to see a doctor and get his heart checked out. Gavin agrees but picking up his phone we discover Gavin’s hiding a secret of his own!

When Beth buys a birthday present for Craig in Barlow’s Buys, Tracy gives her Rob’s cufflinks for free, telling her they’re a wedding present for Kirk. Calling Tracy’s bluff, Carla thanks her for giving the cufflinks to a friend rather than selling them on. Realising Tracy was only using her to score points off Carla, Beth hands the cufflinks back to Carla.

Dev plans an evening out with Julie, asking Mary to come round. Getting the wrong end of the stick Mary arrives with a DVD and is stunned to see Dev and Julie in a passionate embrace. As Dev proudly announces he and Julie are going on their first date, Mary realises she’s nothing more than the babysitter. Will Julie and Dev clock her disappointment? 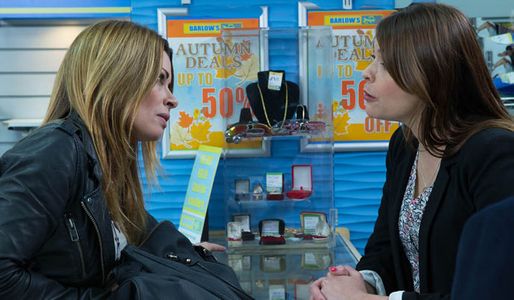