When Rana’s parents arrive for a family meal, Rana squirms as they inform Yasmeen and Zeedan of the string of unsuitable men in her past. Zeedan’s glad to escape to the Bistro when Leanne calls, confiding in her that he’s worried that he and Rana are rushing into marriage, as there’s so much he doesn’t know about her. Meanwhile Zeedan’s dismayed to learn that Yasmeen’s pawned her wedding ring and other family heirlooms to pay towards the wedding. Rana tackles Zeedan about his distant mood but she’s floored when he announces that he can’t marry her as watching his grandparents’ marriage fall apart has made him question their own relationship.

When Kirk tells Aidan that Liam is missing his mummy, Aidan resolves to do what he can to help speed up Maria’s release. He meets up with Ben, a hotshot solicitor and asks him to take on Maria’s case but in doing so is Aidan dangerously putting his business and family on the line for Maria?

Having found a letter from school about Aadi’s repeated failure to hand in his homework, Erica insists they’ll do their homework in the shop in future where she can keep an eye on them. As the twins set about their school work, they steal some scratch cards. When a thrilled Aadi reveals he’s won £300 they form a plan to collect their winnings without exposing their scam. On the understanding they’ll split the winnings three ways, Asha and Aadi cajole Bethany into presenting the winning scratch card to Erica. Will they be rumbled?

Daniel joins Ken on his walk with Eccles. Ken apologises to Daniel for not spending more time with him when he was growing up meanwhile someone watches on as the pair enjoy a drink together.​​​ 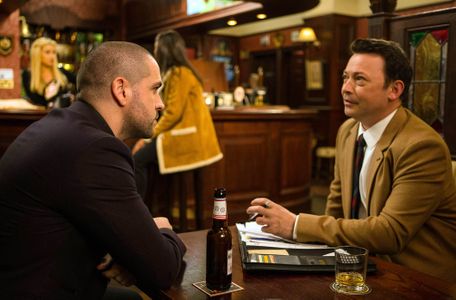