Steve’s thrown when Michelle mentions a long engagement, worrying that she doesn’t really want to marry him and only agreed out of pity. When Michelle then adds there’s no rush to buy an engagement ring, not wanting to pressurise Steve, his doubts multiply. Convinced his illness makes him a burden to her, Steve calls off the engagement. Michelle decides to fight for Steve and sets about preparing a surprise for him. Lloyd steers Steve back to the Rovers to face Michelle, where he finds the back room romantically decorated with candles. Michelle follows him into the bar and the auction grinds to a halt as she passionately professes her love for Steve then gets down on one knee and proposes. Will Steve accept?

Nick prepares to drive Bethany to the airport. Determined to miss the flight, Bethany throws away his car keys and runs off. Todd finds Bethany hiding in Barlow’s Buys and hands her over to Nick. Nick’s weary as Bethany defiantly insists he cannot force her to board a plane. Chaos reigns at No.8 as Gail phones to tell furious Sarah that Bethany missed her flight.

Faye’s set on giving birth in the shop flat and wants Craig to take the baby to hospital afterwards. But as Craig sets out on a practice run of his journey will they realise the dangers of this plan?

Sean and Billy host the butlers’ auction at the Rovers. The night proves to be a success. On a high Billy suggests he spend the night at Sean’s. David’s downcast as Max gets excited about spending the day with Callum. Todd mischievously informs Tracy that Tony’s sold Jason’s house and may be keen to invest in expanding the business. Tracy gets dolled up and summons Tony to the closed shop. Post-coital Tracy drops hints to Tony about expanding. Will Tony see through her tactics? 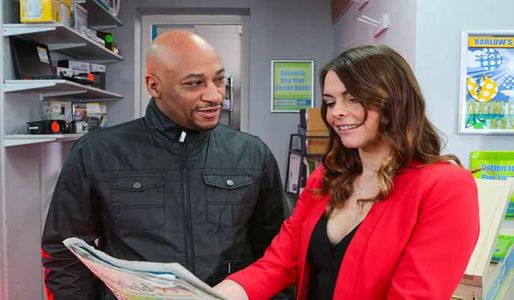 Coronation Street 25/03 - Steve has a proposition for troubled Michelle