His memory returning Ken pieces together the argument he had on the night of his attack. Ken realises in horror that it was indeed one of his family members who pushed him, but who?

Determined they should all bury the hatchet, Leanne orders Peter, Toyah, Nick and Steve to meet her in the bistro. Nick arrives with Simon and in an effort to impress Leanne, suggests they put their differences aside and all have a day out at the seaside instead. But a kick about on the beach quickly descends into a petty squabble. Unaware that Leanne is in earshot, Nick reveals to Peter that he knows Leanne’s alibi is a lie as he saw Peter himself that night. How will Leanne react to the realisation that Nick could have cleared Peter’s name but chose to keep quiet?

As Nathan helps Bethany prepare for the next party, it’s clear she’s dreading it. Nathan surreptitiously slips some pills into her drink. Shona reluctantly agrees to do some hair modelling for David. But when Craig confides in her that he doesn’t like Bethany’s boyfriend Nathan who runs a tanning salon, Shona’s horrified and hurries out on a mission. Shona marches into the tanning salon and orders Nathan to stay away from Bethany.

Cathy corners Brian in the café and pointing out they’re both grown ups, suggests they can still be friends. Johnny tells a worried Kate he’d rather attend his hospital appointment alone. 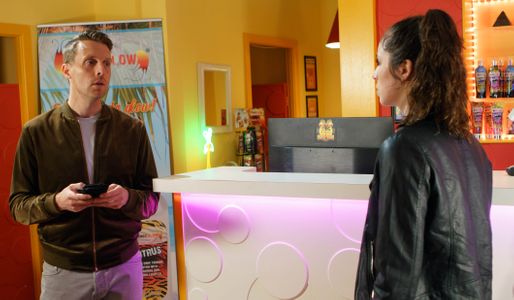