Having spent the night with Dan, Liz is happy as Steve arrives back from Spain. Steve’s pleased to see how Liz is moving on after Tony’s affair but he’s furious to learn that Tony owns half the pub, having conned him out of his share. As he rants and raves about Tony’s betrayal, Steve swears Tony must not get away with it. Worried about the effect Tony’s involvement in the pub is having on Steve, Liz resolves to play dirty in order to get revenge.

Unable to eat or sleep, Gail’s deeply upset over Michael. Michael’s also downbeat, pointing out it was only a kiss. Not wanting to provoke Gail further he moves out of the Grimshaws. When Andy and Steph offer Michael a roof over his head, Michael reluctantly accepts. Gail approaches Michael and pointing out he appears to have forgiven Andy, wonders if he could find it in his heart to forgive her too. Will the couple reconcile?

When Brian finds out from Eileen that Julie and Dev’s relationship is over, he’s cocker hoop. Brian and Dev confront each other, each convinced the other isn’t worthy of Julie. Overhearing their exchange what will Julie have to say?

When David opens an official looking letter giving him the next hearing date, Kylie’s upbeat and assures him they’re a step closer to having Max back. As Roy prepares for his driving test, he gets a phone call from Cathy who’s distraught having left her handbag on the bus. Roy rides to her rescue but Cathy’s mortified to discover he missed his test for her. As he drops her home in a taxi, will Cathy invite Roy inside? 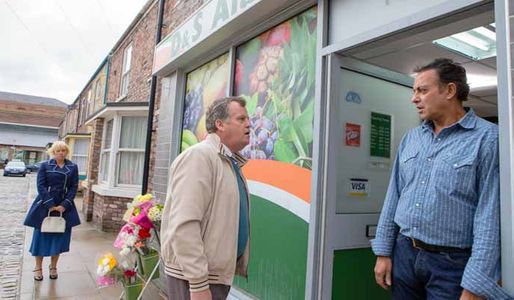