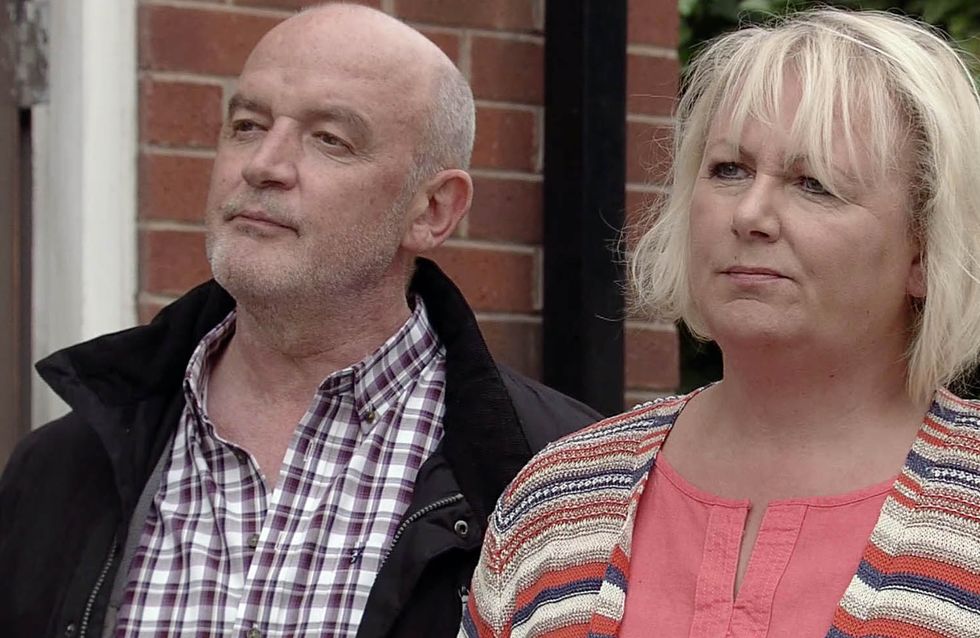 An apologetic Billy tells Todd that they’ll have to cancel their trip to Formby as he’s been left to run the community centre playgroup. As Billy surveys Aadi, Simon and Amy causing mayhem, he realises it’s going to be a long day. He’s delighted when Todd arrives offering to help out. As Billy and Todd emerge from the community centre, Eileen wants to know what they’ve been doing. Painting on his best innocent face, Todd explains he was just helping the vicar with playgroup. Eileen’s suspicious. Billy suggests to Todd they have a night on the town. AsBilly and Todd wait in Tyrone’s cab, they discuss their relationship and how much easier things will be when they go public. Unbeknown to them, a furious Eileen listens to every word over the cab radio!

Having been discharged from hospital for the day, Sarah returns home with Harry. As the Platts clear out Kylie’s clothes, they’re taken aback when David tells them he’s already chosen Kylie’s last outfit for the funeral. Aware he’s struggling, Sarah suggests toDavid he should keep Kylie’s jewellery for Lily. But David snaps at her to mind her own business andSarah’s increasingly worried about him. When Gemma approaches David wanting to know the funeral arrangements, David flies into a rage and accusing Gemma of playing an integral part in Kylie’s death, bans her from the funeral. Gemma’s upset whilst Sarah worries for David’s sanity.

Michelle confides in Liz how she and Steve have decided to try for a baby.

As Zeedan enters the café, he clocks a guy chatting to Rana. Rana gives the guy short shrift but assuming her to be flirting, Zeedan leaves in a strop. Yasmeen advises Zeedan to sort out his differences with Rana as it’s clear they still have feelings for each other.

Eileen angrily drags Todd and Billy out of Tyrone’s taxi. The boys are horrified to realise she heard their conversation over the radio. Eileen rails at Todd accusing him of destroying other people’s relationships for the sake of it. Telling her how sorry he is, Todd heads off to find Billy. Sean arrives home from London bearing gifts for Eileen and Todd. Eileen feels terrible knowing how hurt he’ll be when he finds out about Todd and Billy. Todd confides in Eileen that he’s never felt this way before and he reckons Billy’s the one. Eileen softens but insists he must tell Sean the truth and soon.

Gail and Sarah put pressure on David to let Gemma attend the funeral, as she was Kylie’s oldest friend. David lets Max choose the music, food and drink. Gail’s horrified, pointing out that a funeral is meant to be a dignified affair. When Max announces he’d like to give the eulogy at Kylie’s funeral, David hugs him and tries to conceal his tears. Realising how much David is suffering, Sarah announces she’s not returning to hospital as it’s clear her family needs her. Gail and Bethany try to persuade Sarah that she needs to complete her treatment butSarah’s adamant she’s staying put. David gives her a grateful smile. Sarah asks Bethany how her exams went and how she’s getting on at school but Bethany’s quick to change the subject. Calling in the kebab shop David tells Gemma he’s changed his mind, she can come to the funeral. He then confides in Sarah that he’s going to make sure someone pay for Kylie’s death.

Waving some ferry tickets at Steve, Michelle announces she’s booked them a few days in Ireland with her parents so they can start baby planning. Rana calls at No.6 and apologises to Zeedan for failing to respect his beliefs when they’re actually to be admired. Zeedan softens and Rana begs him to give her another chance. Will Zeedan agree?​​​​​​