Coronation Street 3/2 - It's small steps for Carla and Johnny

Robert calls on Carla and angrily tells her how Johnny threatened him. Pointing out that she’s more to lose than he has, Robert suggests she has a word with her Dad. Carla arrives at the factory with Richie in tow and is embarrassed to find Johnny and Aidan mid-row. Carla apologises to Richie and assures him it’s a one off. Dispatching Aidan and Richie, Carla rounds on Johnny, telling him about her visit from Robert and ordering him to stay out of her personal life.

Jenny’s nervous as she prepares for her first day at work. Furious to discover that Jenny’s the new cleaner at Underworld, Sally storms into the office and tells Aidan either he sacks Jenny or she’s resigning. How will Aidan respond? Meanwhile Sean and Beth are furious to discover someone has stolen their lunch. Beth’s then horrified to find a tenner missing from her purse. Sally and Beth reckon Jenny’s the culprit. As Rita and Jenny enjoy a quiet drink Sally approaches and pointing the finger, accuse a mortified Jenny of thieving from the factory staff.

Tyrone’s downbeat as Fiz hands him a cheap packed lunch. As Tyrone looks wistfully at Luke’s fish and chips, Luke takes pity on him and swaps half his lunch. Later Fiz and Tyrone are touched when Luke offers to increase his rent by £50 a month.

Simon’s thrilled when he’s picked for the football team. Leanne’s delighted to see him smiling for once. Erica calls at No.7 and drags Mary away from the TV, insisting they’re going shopping. Will Erica succeed in cheering Mary up? 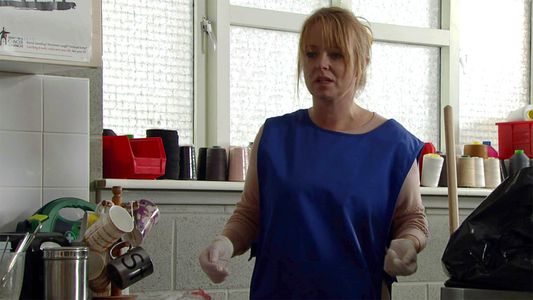