It’s Bethany’s 16th birthday and Gail bans all talk of Callum for the day but yesterday’s scare continues to prey on Sarah’s mind. Callum still on her mind, Sarah’s spooked when Bethany receives a parcel from a secret admirer in the post. Todd tells Jason he’s sure that Sarah’s hiding something about Callum’s death. Jason’s defeatist but Todd vows to get to the truth. Todd implores Sarah to confide in him and is baffled when Sarah lets slip that she saw Callum’s dead body. Todd humours Sarah and promises to keep her confidence and asks who killed him. Todd’s eyes widen in shock as Sarah whispers her reply in his ear.

Alastair loads the roof slates from No.3 onto a truck and promises Norris the new tiles will arrive shortly. But rather than pay Norris for the slates, he drives off, leaving Norris roofless. Phelan gloats at Norris’s misfortune but offers to retile his roof at mates’ rates. Mary forces Norris to swallow his pride and accept.

The McDonalds are enjoying breakfast in the Rovers when Tracy barges in,intent on taking Amy back to No.1. Amy refuses and Tracy leaves, thwarted. Steve tries to persuadeAmy to forgive Tracy but to no avail. Michelle hatches a plan. When Michelle coaxes Amy into admitting that she does miss Tracy a little, Steve blunders in giving the game away. Amy’s furious.Amy’s intrigued when Will knocks on the Rovers’ back door asking to see Michelle.ELSEWHERE Chesney’s furious with Sinead for trying to kiss Aidan. Will he accept her explanation?When Yasmeen and Sharif announce they are going away for the weekend, Zeedan excitedly texts Rana inviting her round for the evening. When she arrives she kisses him passionately.​​

Sarah tells Todd that Callum attacked her and she’s to blame for his death. As she breaks down, Sarah’s oblivious that Todd believes she’s just confessed to murder. Todd tries to calm Sarah. David’s alarmed to spot them talking and whisks Sarah away toBethany’s party. Billy’s astounded when Todd reveals that Sarah killed Callum. Todd refuses to letSarah be punished for her tormentor’s murder but can’t countenance Jason taking the rap either.Feeling for him, Billy insists he must do the right thing. Todd doesn’t know what to do.

Michelle’s shocked to find Amy grilling Will about how they know each other. She quickly bundles Will out of the back door. Amy’s suspicious and asks if Michelle is going to dump Steve for Will. Shocked Michelle denies it and assures Amy that she loves Steve.When Michelle suggests she should go back to Tracy, Amy insists that if she can’t stay at the Rovers,she’ll tell Steve about Will. Will Michelle be blackmailed by Amy?

As their kiss gets steamy, Rana leads Zeedan towards the stairs but he irritably points out that she knows he doesn’t believe in sex before marriage. Rana’s frustrated and Zeedan’s gutted when Rana decrees that by putting his beliefs above her feelings, he’s ending their relationship.

Jason enters the pub to find Gemma looking miserable. But when he approaches, she furiously accuses him of murder and throws her drink over him. Sinead explains to Chesney that her own insecurities cause her jealousy, but he thinks it’s a poor excuse for kissing Aidan. When Sinead hints that Chesney should kiss someone to even the score, he storms out leaving her panicking.Chesney finds Gemma feeling sorry for herself and fills her in on Sinead’s antics. Gemma urges Chesney to fight for Sinead if he loves her. Can he save his relationship? Phelan basks in Norris’ gratitude for saving his roof before meeting up with Alastair. Was this another of Phelan’s scams?​​​ 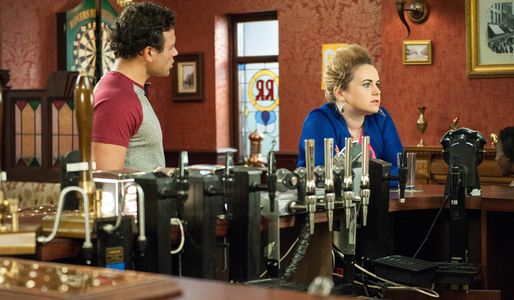 Coronation Street 9/3 - The Truth Comes Out About Bethany

Coronation Street 16/3 - Sarah is rocked by a pregnancy scare