Toyah is devastated when Peter tells her he doesn’t want any more children. Her husband Toby calls to see her to tell her the fertility clinic have been in touch regarding the future of their frozen embryos and she finds herself on the horns of a dilemma when he asks her to give their relationship another chance. Who will she choose?

Kevin is furious when he discovers that Tyrone has given Phelan the job of repairing the burnt out garage. Tyrone makes it clear he still believes it is Kevin’s fault they are in this mess and when a phone call brings shocking news it looks as though Kevin’s troubles are far from over.

Looking like the cat that’s got the cream, Jenny shows the factory girls her engagement ring. Johnny wonders how he’s going to break the news to Kate but the decision is taken out of his hands when Kate arrives back from Bali - how can Johnny recover this?

Having made a list, Ken talks Adam through his will but when Ken explains that only a quarter of his estate is to be split between his grandchildren how will Adam react? And Brian rubs Cathy up the wrong way.

​​​​Toyah catches up with Leanne and Eva at the spa. Noticing Toyah’s red eyes, Leanne wonders what’s wrong. Toyah breaks down and explains how much she wants a baby and how she went through years of fruitless IVF with Toby. When Leanne suggests she could still start a family with her new man, Toyah’s forced to admit he doesn’t want any more children.
​

When Kevin admits he punched Tyrone, Anna resolves to go back to work and do her bit to get them out of their financial mess. In a bid to solve all their financial problems, Kevin tells Anna they should sue David Platt and go after compensation for her injuries. How will Anna feel about his suggestion?

As Jenny swoons over wedding magazines and boasts to the factory girls how she’s going to have the wedding of her dreams, Kate warns Johnny he could end up penniless if he’s not careful. How will Johnny react?

Detecting Adam’s disappointment, Ken explains he has to put his children first. As Ken heads off, Adam throws him a look of contempt. Todd clocks this. In the Rovers, Adam reveals his plans to set up his own legal firm and make some serious money. Todd says he’d be interested in coming in with him.​​ 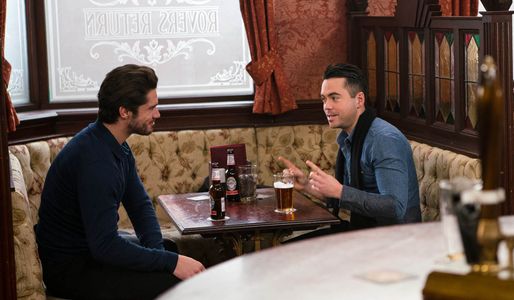 Coronation Street 01/02 - Can Toyah Give Up Her Dreams For Peter?