Coronation Street 30/09 - Nick wakes…but what will he remember?

Nick's making good progress and will be talking soon - so David's worry heightens. David's desperate to make the most of his time with Kylie and Lily so takes them for a walk, where he tells Kylie how much he loves her and suggests they move away for a fresh start. As Kylie gives her reply at the hospital, Nick struggles to speak...

Elsewhere, Michelle heads for a shit at the pub, insisting she loves working there - and Steve is pleased. Further wanting to solve Michelle's woes, he gives Ryan a pep talk and tells him to grow up. Ryan jumps into action - but Michelle and Steve are floored by the results.

Also, Katy is taken on in an admin role at the builders' yard and finds Owen has unpaid invoices. With Anna on his back, he promises to chase them.

An agitated Nick says David's name over and over, so Gail rushes to get him, presuming he's worried about his brother. David tries to hide his fear as he heads to the hospital. By his bedside, he nervously says hello to his brother - but will Nick remember that David caused the crash?

Elsewhere, Michelle is furious with Steve after Ryan's shock announcement. As he goes to pack, she wants to convince him to stay.

Also, Owen tries to chase up a debt from a slippery customer but realises some less than traditional tactics may be called for. Egged on by Gary, Owen decides to pay him a visit - much to Anna's concern. 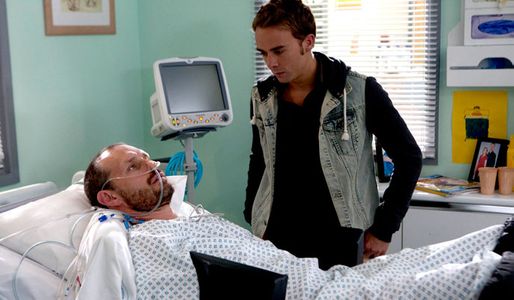