As Fiz prays that today’s scan will yield good news for Hope, Tyrone secretly opens a letter from the loan company demanding payment. When he discovers another cheque has bounced, a desperate Tyrone dips into the garage’s petty cash. Kevin catches him and is shocked by Tyrone’s desperation. When Sophie then blurts out that she and Kevin are taking a holiday in the sun before the builders start work on the garage expansion next week, Kevin’s embarrassed. As Tyrone is forced to admit that his debts run to £10K will Kevin feel able to offer him any support? And will Tyrone be forced to confess to Fiz?

Johnny calls Rob and informs him he’s told Carla the truth so his blackmail plot has failed. Rob’s thwarted and furious. Nick’s gobsmacked when Carla reveals Johnny’s secret and Rob’s blackmail attempt. At the factory Aidan celebrates winning the O’Driscoll contract and heads off to tell Carla. Johnny’s filled with dread at the prospect of Carla revealing all to Aidan and Kate about his past. Roy and Nick implore Carla not to distress Aidan and Kate with the truth in her bid to punish Johnny. But will Carla take their advice on board?
​
Billy senses Emily’s yearning to volunteer in Peru and encourages her to go for it. Her mind made up, Emily announces she’s off to Peru.

At Amy’s request, Ken grudgingly allows Tracy to move back into No.1. To Audrey’s amazement, Nessa persuades Ken to throw a New Year’s Eve party. Audrey questions whether Ken really wants to host a party and wonders if Deirdre would approve of Nessa. Has Audrey gone too far? 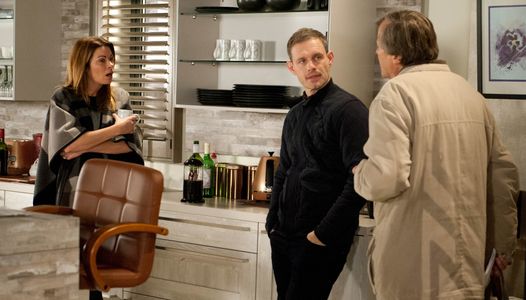