Vinny is furious when he learns that Todd has said he wants to resign and and warns Phelan that it’s game over unless he can encourage Todd to stick with them. But when Todd learns that Sarah has decided to invest in a flat he’s panicked and confronts Phelan, ordering him not to rip off his close friend or he will blow the whistle on him and Vinny. But when Phelan tells Todd what Vinny is capable of, will Todd have a change of heart?

When Maria explains to Caz that she has to go to visit Pablo in London, she’s taken aback when Caz invites herself along for the trip too. But when Kirk points out to Maria that Caz clearly has feelings for her, will Maria agree or will she bury her head in the sand?

Sarah is delighted when she unexpectedly receives a large sum of money and she decides to approach Phelan and Vinny about buying one of their flats for her and Bethany. But with Todd on Phelan’s case, will she be successful? ELSEWHERE Cathy and Roy set the date but Tyrone still has his misgivings. David is furious when the FLO tells him that Clayton has decided to plead guilty to manslaughter which would mean if he isn’t found guilty of murder he could receive a lighter sentence.

Phelan is adamant that Todd should keep on Vinny’s good side if he knows what’s good for him. Todd agrees to come back to the deal as long as they agree to repay Sarah for any money she loses out on. When Phelan offers to pay for Billy’s charity trip, Billy is delighted and thinks Todd is behind it. Todd’s angry at Phelan’s games, but what point does Phelan have to prove?

Knowing she has to have an honest conversation with Caz, she explains to her that she only sees her as a friend. Caz flees in tears, unable to come to terms with it.Maria tells Caz that she thinks it best if she moves out of the salon flat before she leaves for London. But with Maria out of the way, will Caz persuade Kirk to let her stay a while longer and what plan does she have up her sleeve?

Bethany is surprised when Lauren gets expelled over the bullying and the head teacher praises Bethany for coming forward and speaking out against the bullies. Bethany cries tears of relief to Sarah who hopes this mean their nightmare might be over at last.

Mary tries to coach Erica on disciplining the twins. David agrees to go to grief counselling to keep his mum quiet. ​​​​​​ 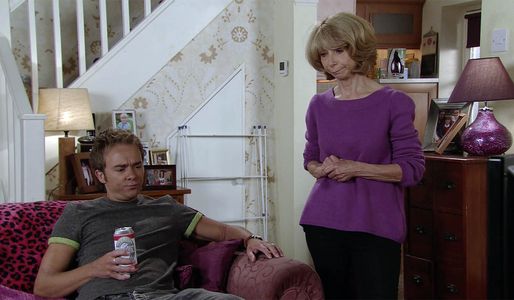