Caz is disappointed when Maria tells her that grateful though she is, she’d like her to find somewhere else to stay. As Maria comforts Liam and promises him the burglar won’t come back, her phone rings but there’s nobody there. Maria’s clearly unnerved, meanwhile Caz kills the call and guiltily puts her mobile away. As Caz prepares to leave,Liam finds his dad’s watch in Caz’s bag. Will Caz be able to explain? Meanwhile unnerved by the weird phone calls, will Maria have a change of heart and ask Caz to stay?

Aidan calls the girls together and asks for volunteers for overtime.One by one the girls refuse, angry with Johnny for docking their wages. When the girls demand to know how Johnny found out about their film ruse, Johnny refuses to say. Accusing the management of spying on them, Sally leads the girls out on strike. In the pub, the girls congratulate Sally for standing up to the management. Tim too is proud of her but warns her she’s wrong about Phelan.

Aware that there’s something up with Liz, Michelle puts pressure onSteve to find out what’s eating her. Steve promises to have a word. Steve lays the law down to Liz and tells her if she can’t disguise her feelings over the situation with Leanne then she needs to find somewhere else to live as he can’t risk losing Michelle. Liz is stunned.

Having reassured Eileen that she’s doing the right thing with Jason’s money, Phelan’s relieved when Eileen promises to transfer the £65k today. Todd calls in the cab office and is gutted to hear she’s at the bank transferring Jason’s money. Tim sympathises, and reckons Todd’s right not to trust Phelan. Todd tells Eileen she’s mad to invest in Phelan’s project but is Eileen prepared to listen?​​​ 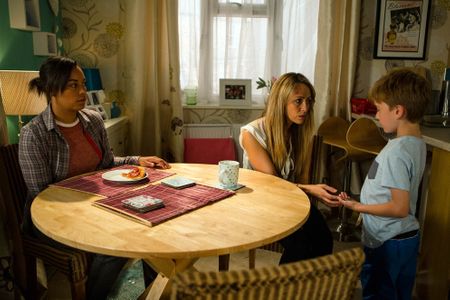