Coronation Street 4/1 - Carla's a prisoner of her guilt

When Nick tries to engage Carla in a conversation about wedding menus with Robert, Carla makes excuses, unable to look Robert in the eye. Visiting Rob in prison, Rob tells Carla that if Johnny doesn’t pay up, he’ll reveal the truth to Aidan and Kate. Pointing out it’s not her problem, Carla leaves. But Carla’s had enough and leads Kate and Aidan into the Rovers back room, intent on telling them the truth.

Roy confronts Nessa with the letter. Nessa’s embarrassed and admits she and Alan were having an affair. Ken’s appalled at her admission. Panicking, Nessa implores Roy not to tell Cathy and admitting there are more incriminating letters, asks Roy to take her to Cathy’s house to retrieve the letters before Cathy finds them. Against his better judgement Roy agrees but as they arrive they find her in floods of tears having discovered the offending letters.

Kevin’s embarrassed when he receives a hamper of sweets from Joanne. Over lunch Joanne suggests they spend the evening watching a DVD, Kevin has little choice but to agree. Masking her jealousy, Anna agrees to attend another singles night with Erica.

Handing Todd a book on flowers, Tracy suggests he reads and inwardly digests it if he wants a job in her flower shop. Amy later tests Todd on flower names. Will Todd pass the test? When Norris remarks how subdued Mary’s been recently, will Rita reveal that Brendan is in fact a married man?

Carla drops the bombshell that Johnny’s her Dad. Staring at Johnny in disbelief, Kate and Aidan are appalled to discover Johnny always suspected Carla was his daughter but kept it a secret for all these years. When Liz inadvertently lets slip that Johnny’s wife died after she found out about his affair and stepped in front of a car, Kate and Aidan are horrified. As Johnny desperately tries to explain himself, will Kate and Aidan be able to forgive him?

Desperately upset, Cathy orders Nessa out of her house. Cathy’s hurt to realise that Roy knew of the affair and was helping Nessa to retrieve the letters. Roy apologises profusely but Cathy asks him to leave. Meanwhile when Nessa grumbles to Ken about the way Cathy treated her, Ken’s appalled by her selfishness. Could the relationship be on the rocks?

Erica drags Anna off to the singles night whilst Kevin suffers an evening watching a DVD with Joanne. When Kevin later finds Anna in the kebab shop after the singles night he flirts with her and offers to walk her home.

In the bistro, Tracy tries to talk to Robert but he blanks her and heads back into the kitchen. Passing Robert on her way home, Carla blanks him. Grabbing Carla by the arm, Robert suggests she should lose the attitude as he could make life very difficult for her. Carla’s unnerved. Norris and Rita voice their concerns to Mary about her affair with Brendan. 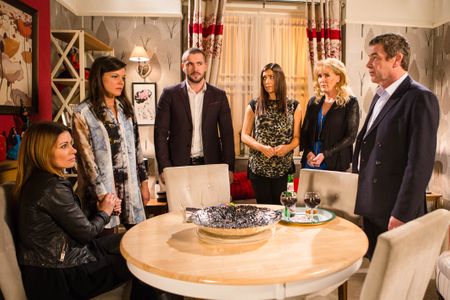