Sally tells Kevin that she wants to buy the factory, she wonders if he’d be interested in investing some money too. But when Carla catches Sally snooping around her accounts, she fires Sally on the spot. Sally thinks her dream of buying the factory is in tatters, but when Kevin tells her he’s decided to invest in her plan she’s overjoyed and goes in to kiss him. Will Kevin reciprocate?

When Michael and Eileen approach Barlow’s Buys in another attempt to buy back the bracelet, they’re panicked when they find it closed and Eileen tells Michael they have no choice but to break in. But will Michael be caught in an act of burglary for the second time in Weatherfield?

Ken treats Tracy to lunch in the Bistro and they are both impressed by the food. But when Leanne introduces them to the new chef, Tracy is gobsmacked when she comes face to face with Robert!

Liz gives Tony short shrift when he presents her with her favourite chocolates as a peace offering.

Having agreed to keep their near kiss between them, Sally and Kevin try to forget about it, but Sally is consumed by guilt when Tim returns from Wales a day early and tells her how much he loves her. When Tim later asks Kevin to be his Best Man, can he and Sally paint a smile on to mask their guilty secret, and will Kevin accept?

On strict instructions from Eileen, Michael heads back to Barlow’s Buys on a mission to buy back the bracelet. But when Liz announces she’s found her bracelet, Eileen and Michael are gutted that the bracelet they found wasn’t hers after all and a smug Gail is highly amused when she learns they paid £200 to buy it back.

When Robert tells Tracy that Joni has kicked him out and he needed a job, she’s absolutely furious and demands to know why he couldn’t have found one further away. But an adamant Robert refuses to be deterred by Tracy’s anger as he tells her he’s staying in Weatherfield until she agrees to give him a second chance!

Simon tidies the flat and Leanne thinks things are looking up between them. But when she suggests they start afresh, Simon snaps at her and Leanne realises she spoke too soon... 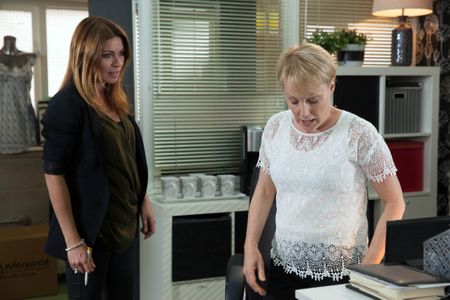