Eileen’s taken aback as Gail barges her way into No.11 and insists on waiting for Michael. Michael returns from visiting his ex wife Susan to find Gail there. He’s furious to see her and slams out. Michael later bowls into the Bistro, roaring drunk, loudly revealing that Andy’s an impostor and Gail concealed the death of his real son. Andy’s mortified as Eileen brands Gail despicable and guides Michael home. Eileen and Michael try to cheer each other up as they lament their disastrous lives. But when Michael suddenly leans in for a kiss, how will Eileen respond? Jason’s shocked to see Todd brazenly heading to work. Jason hurls abuse at him but Todd’s blasé, delighting in his brother’s misery. Set thinking about his break-up, Jason tries to contact Eva.

Simon’s growing increasingly moody and storms out of the flat when Leanne asks him to help with some jobs. He later returns in a foul mood, angrily reminding Leanne that his mum is dead and hurls the TV remote at her, hitting her in the face. Leanne’s stunned.

Liz tells Sean she’s started proceedings to get Tony out of her life and has the papers for him to sign to ensure he is a silent partner. Liz is adamant that when he crawls out of hiding, she will be ready for him.

Sophie interrogates Jenny about where she was on the night of the fire? Andy’s relieved when Nick lets him keep his job at the bistro due to staff shortage.

As Eileen and Michael get physical on the sofa, Michael starts to struggle for breath and collapses in agony. Eileen’s horror turns to panic when Gail knocks on the door. Gail’s shocked by Michael’s state, oblivious to the cause of it. As Michael lies semi-conscious in hospital, Gail questions Eileen about his collapse. Michael stirs and orders Gail to get out. Michael’s doctor questions Eileen about his collapse. Eileen admits they were getting frisky at the time. She’s horrified to see a tearful Gail standing nearby. Has she overheard Eileen’s confession to the doctor?

Simon apologises for losing his temper but Leanne marches him round to No.1 and leaves him with Ken. Ken’s curious about her bruise, will Leanne admit it was caused by Simon?

Liz is fuming when she receives flowers from Tony with a note saying how sorry he is. Liz takes out her bad mood on Sarah and Callum in the bar as her frustrations boil over.

Maria realises that Luke must have punched Andy after discovering how he embroiled Steph in his deception. Telling Luke she knows why he hit Andy and is sorry for treating him badly, can Maria persuade Luke to forgive her? 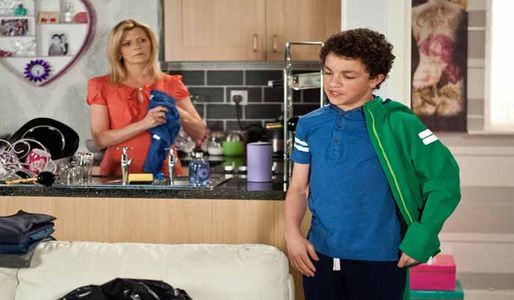