Roy unburdens himself to Carla telling her how he and Cathy have broken up and it’s all his doing. Carla’s adamant that Roy shouldn’t give up and must try harder to win her round. At home Cathy gathers up Alan and Nessa’s love letters and dropping them in the bin, sets fire to them. Taking Carla’s words on board, Roy sets off for Cathy’s house, with Nessa in pursuit. But will they arrive in time as the fire has taken hold of the house and Cathy struggles to breathe.

Having discovered some graffiti on the garage wall, Kevin phones the council. But when Tim and Sally lead Sophie and Kevin to the ginnel and reveal the blank wall where Maddie’s mural used to be, Kevin blames himself, realising the council must have cleaned it off. Sally vows to kick up a fuss. Meanwhile Sophie clocks the chemistry between Kevin and Anna.

When Brendan calls for Mary, Norris gives him a flea in his ear and tells Mary she’s making a terrible mistake. Will Mary have the support of any of her friends?

In the factory, Kate does her best to restore order but Carla and Aidan refuse to discuss the situation with Johnny. Nick insists that he Carla and Robert sit down to discuss wedding menus. Carla and Robert cover their guilt. Tyrone confides in Kevin that they’ve got a date for Hope’s operation but he’s fallen behind on his loan repayments.

Cathy lies semi-conscious in her smoke filled living room crying out for help. As Roy and Nessa let themselves in, they’re engulfed in smoke. Roy orders Nessa to phone the fire brigade as he rescues Cathy from her burning house. Thanking him for saving her life, Cathy collapses in Roy’s arms. Will Roy’s heroics bring the couple back together? Meanwhile as Cathy is loaded into the ambulance, she bitterly explains to Nessa that the fire whilst burning the offending love letters. Nessa arrives in the pub in a state and tells Ken about the fire at Cathy’s house. Taking Nessa back to No.1, Ken suggests they go their separate ways. Will Nessa be able to talk Ken round or is their relationship over?

Anna leads Sophie, Sally, Tim and Kevin to the ginnel and reveals Craig and Caitlin hard at work on a replacement mural in memory of Maddie. Sophie’s touched as Craig explains it was Anna’s idea. In the café Kevin suggests to Anna that they bin the singles night and go out with each other, how will Anna respond?

Brendan takes Mary for a meal and telling her there’s nowhere in the world he’d rather be, gazes at her adoringly. Mary swoons. When Mary suggests to Brendan that they finish their evening at No.7 as Dev is out, Brendan’s thrilled. Alone together, Brendan assures Mary she means everything to him. Taken in by his flattery will Mary lead Brendan upstairs?

As Nick and Robert talk wedding menus, Kate arrives with some factory paperwork. Grabbing the excuse to leave, Carla hurries out with Kate. 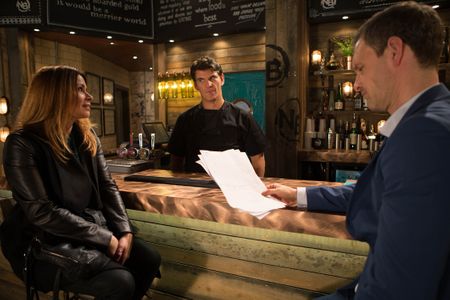