It’s Cain’s 40th birthday and he is grumpy, thinking no fuss has been made; unaware Moira is preparing a surprise party. He is shocked to learn from Charity how Debbie is trying to force a confession in order to shop her to the police. Charity explains DI Bails has a grudge against her and how she wishes she and Debbie were back on track again. Later, Charity tells Debbie and Pete the truth about DI Bails and what happened in their past. Charity’s emotional account clearly has an impact on Debbie but Charity realises she needs to do more.

When Vanessa loses patience with Kirin over his reluctance to move out and his attitude towards college and his father, she spontaneously dumps him. Later, Vanessa concedes she may have overreacted and calls Kirin, suggesting he head over to talk. A chuffed Kirin leaves the party he is at and gets into his car. Fuelled with booze, will this journey take a turn for the worse?

Moira has pulled together some surprises for Cain who is bemused to turn up and find everyone with a mask of his face on. But Moira is nowhere to be seen and when Cain tries to call her he’s alarmed to get through to a nurse, shocked to hear she's been run off the road.

Harriet's feels for Ali’s family over missing Rachel and suggests she use her old job contacts to help with the search. Marlon's encouraged when April starts to decorate Donna’s grave when the headstone arrives, but his mood changes when April spots Ross and is keen for him to help. Brenda goes public on Jimmy’s big problem. 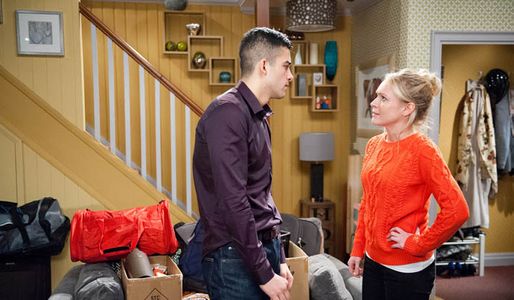