Coronation Street 03/07 - Liz and Michelle are partners in crime

Liz has plans for Tony. Calling in Barlow’s Buys she suggests to Tracy that together they can knock Tony off his pedestal by reporting him to the police for handling stolen goods. But Tracy refuses to listen and Liz realises she’s as guilty as Tony. However when Liz and Michelle discover a batch of stolen goods is due to be delivered today, she’s more determined than ever to get her own back. As Tracy unloads his stolen goods, the police arrive. Will Liz’s revenge end in Tracy’s arrest?

Brian tries again to persuade Julie to join him on his round the world trip but she studiously ignores him leaving Brian crushed. Meanwhile Mary tells Dev to stop wallowing in self-pity and fight to save his relationship with Julie. Can Dev win Julie round?

When Roy gets a call from a distressed Cathy telling him the bailiffs have arrived at her house, Carla offers to drive Roy there immediately. Roy and Carla arrive to find the bailiffs in the garden. From an upstairs window, Cathy shouts at them to leave her alone.

Erica calls to see Nick and thanks him for standing by her and behaving like a true gentleman. Emotions running high can they find a way forward for their relationship?

After stitching up Tony, Liz is hoping the police crawling all over his business will make him show his face. But when Tracy arrives in the pub having been released by the police, Liz and Michelle are shocked. Has she been charged? Under Tracy’s steely gaze, Liz admits she was the one who shopped them and accuses Tracy of covering Tony’s back. Having had enough, Tracy tells Todd she’s leaving to visit a friend in London and when she comes back she intends to make some changes. Has Tony become dispensable? Back at the pub Liz introduces Leanne to Dan. Both Leanne and Dan hide their shock at seeing each other. What is their history?

Dev begs Julie for a second chance but Julie’s adamant she won’t settle for second best and it’s over. Julie then calls on Brian and drops a bombshell. Has she had second thoughts about his offer to travel the world or will she head off alone?

Roy offers to pay off the bailiffs but Cathy won’t hear of it and finally lets them into her house, telling them to help themselves. Shocked at the state of the house, the bailiffs leave empty-handed promising Cathy the courts will be in touch. When Cathy reveals the inside of her house, Roy and Carla are stunned. What has Cathy been hiding?

Nick follows Erica to her car and telling her he still has feelings for her, begs her to give their relationship another chance. Will Erica agree? 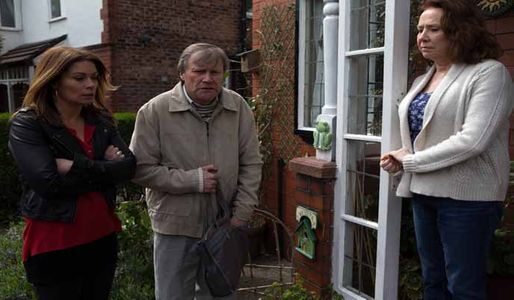 Coronation Street 28/07 - Robert And Michelle Realise They're Being Targeted