Donna and Marlon are devastated when told by the doctor the cancer has spread and Donna might now only have a matter of weeks left to live but Donna's reluctant to have chemo, if the side effects will make her feel worse. She tells a reluctant Marlon she's going to cover to people she's having treatment but Marlon tries to make Donna see she should tell people the devastating news. Donna refuses and Marlon finally cracks, leaving her taken aback at the depth of his feeling and they're both shocked and mortified when they kiss. Marlon wants to tell Laurel about the kiss but Donna's adamant he can’t as she doesn’t want them splitting up over it. Can Marlon lie to his fiancée Laurel?

Worried about money, Cain makes up an excuse to get Charity alone to the garage where he traps her locking her in the car, demanding she give him twenty grand or he will tell Declan about the baby. Will Charity give in to his demands and how will Moira feel when Cain fails to turn up for the meal she has cooked him?

Sam offers Tracy cash so she doesn't have to work but Tracy keeps him at arms length. She’s not happy when Robbie points out she's using Sam but she threatens to tell Sam he made a move on her if he doesn't back off.
Robbie sees the state of a hung-over Adam. Sean’s devastated when Belle breaks the news it’s over. She suggests he sign up to the army. 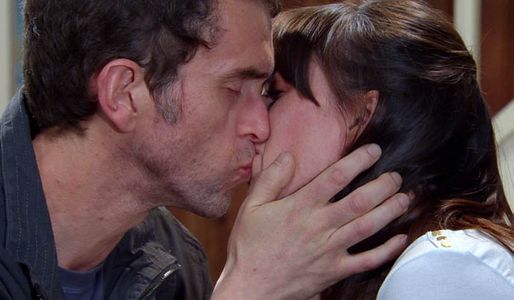 Emmerdale 08/05 – Donna is forced to move in with Paddy

Emmerdale 29/08 – Will Marlon have an explanation for his deceit?