Home / Food and Drink / Recipes / Juiced Up? Why You Should Never Try The All-liquid Diet

Juiced Up? Why You Should Never Try The All-liquid Diet 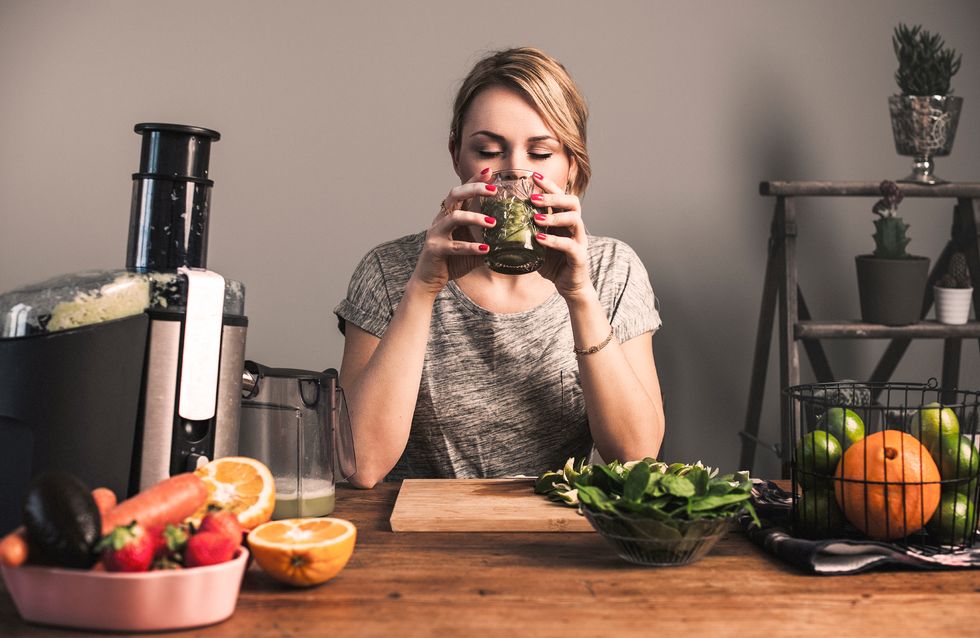 I've never been into diets - mostly because I've never been good at them when I've tried and especially because I believe in eating well-rounded, balanced meals for a healthy lifestyle. And if you want to indulge a little every now and then? Go for it! it probably comes as no surprise that I'm especially against the all-liquid diet since it can do more harm to your body than good. Here's why you should pass it up...

Unfortunately, this fad diet has become extremely prevalent amongst both men and women. While most people do all-liquid diets for about seven to 10 days, there are others who do so for weeks on end. So before you even think about cutting out solids from your life just to "lose weight fast" or "cleanse" your body, educate yourself on what all-liquid diets really ​do to your health.

Are You Truly Losing Weight?

Erin Henrie, health coach and nutritionist for Simply U Nutrition & Wellness, agrees that making liquids the sole proponent of a diet isn't exactly the best option for weight loss. Considering that many individuals seem to skip out on discussing an all-liquid diet with an expert first, it's all too easy for people to do such diets incorrectly, actually causing more harm to their body than helping it. And while yes, some dieters do lose weight this way, Henrie says that what might help a select few people doesn't work for others.

"Juicing, if done correctly and for a short period can be beneficial depending on the individual," Henrie says. "You should always listen to your body: if it is hungry feed it, if it is satisfied stop. Liquid diets are very tricky as the majority of them aren't the correct or healthiest way to go about weight loss."

Henrie also added that while only drinking liquids for a fews days will definitely help in shedding pounds, that can mostly be attributed to water weight the majority of the time.

There Are Many Negative Side Effects

Notably, there are many side effects that take place during an all-liquid diet, especially if done the wrong way. From feeling sluggish to extreme stomach pains, hopping on a juice cleanse doesn't go down without some nasty consequences. Perhaps the worst of all? Liquid diets can actually result in a person gaining more weight than they lost due to binge-eating, according to Henrie.

"If done incorrectly you can really disrupt your metabolic rate making it even harder for you to lose weight and get on the right track," Henrie says. "You may also experience headaches, irritability, lack of focus and lack of energy to name a few."

You're Probably Not Receiving the Nutrients You Need

From the "Cayenne Pepper Diet" to a "Green Juice Cleanse," there are so many liquid diets out there, that it's difficult to say which, if any, of them are really helping. Simply put, the human body needs certain things that those juices and shakes you're drinking just can't provide. So why prevent it from receiving all that nourishment with well-balanced meals?

"I could write a 100-page list of names of all the liquid diets that are claimed to be the latest and greatest," Henrie says. "I saw one the other day that included Jell-O, broth, grape juice and sports drinks to name a few ingredients, which is ALL sugar, the number one reason for weight gain. Some [all-liquid diets] do have healthier foods such as high quality fruits and veggies, however most are lacking in the essentials that keep us energised, satiated and nutrient efficient."

Additionally Henrie says that since many of the all-liquid diets that exist don't contain the nutrients we need to be healthy, this can slow down a person's metabolism. With this, the body can actually hold on to calories it does receive, storing it as fat and actually being counterproductive toward weight loss goals. Likewise, some liquid diets also lack proteins and fibre we need to truly help our bodies cleanse themselves of toxins.

"I will say there are a couple of good liquid diets out there, but those are few and far between and typically take a lot of planning, not just your magazine five-step article on how to lose weight on a liquid diet."

If Done Incorrectly, You Aren't Really Cleansing Your Body of Anything

Although all-liquid diets are often used as a means to rid a person's body of toxins (something which isn't even scientifically proven to work), solely consuming liquids can have the opposite effect completely.

"On a scientific level, when a liquid diet is done incorrectly the toxins that are released in your body have nowhere to go," Henrie says. "They are released in the bloodstream without any fibre to grab onto and can't be taken out of the body, making people more sick than they were in the first place."

Henry emphasises how important it is for people choosing to participate in an all-liquid diet to research the type of liquid diet they're doing and to speak with someone about it first.

"It is true that your body will be cleansed of toxins if they can be properly carried out of the body through urine, sweat, and so on," Henrie says. "However if done incorrectly the toxins will just float around in the bloodstream causing several health issues."

You Might Not Be Getting the Calories You Need

Furthermore, when we don't provide ourselves with the calories we so desperately need, we're merely contributing to the possible ailments that can take over our bodies.

"Food fuels our bodies at a cellular level and if we don't take care of it the way it needs, those cellular functions and systems will get out of whack, leading to a host of health issues," Henrie says. "It can show up as diabetes, cancer, a common cold, or just as simple as a lack of energy. It truly is a ripple effect and our body will heal itself as long as we feed it correctly. If not, it will heal itself as much as it possibly can until it begins to break down."

Knowing this, it only makes sense to make sure we encorporate liquids and solids into our diets for a well-rounded and healthy lifestyle.

If not to protect your body — which should really be a top priority — you should at least protect your purse. Even if someone is doing a proper all-liquid diet with quality veggies fruit, no added chemicals, sugars or preservatives, according to Henrie, there's a hefty price tag involved. Henrie says that some juices can range from £15-20 quid per bottle whereas some all-inclusive juice deals are much more.

The mad part is that not only can juicing be pricey, but people are paying money for a diet that isn't all that beneficial or healthy. In my opinion, there are much better ways to spend your next paycheck.

Have you ever tried the all-liquid diet? Tweet us at @sofeminineUK!

Inspirational Tips to Get Your Weight Loss Mission Started:

How to Relax: 20 Tips for Easing the Mind & Body